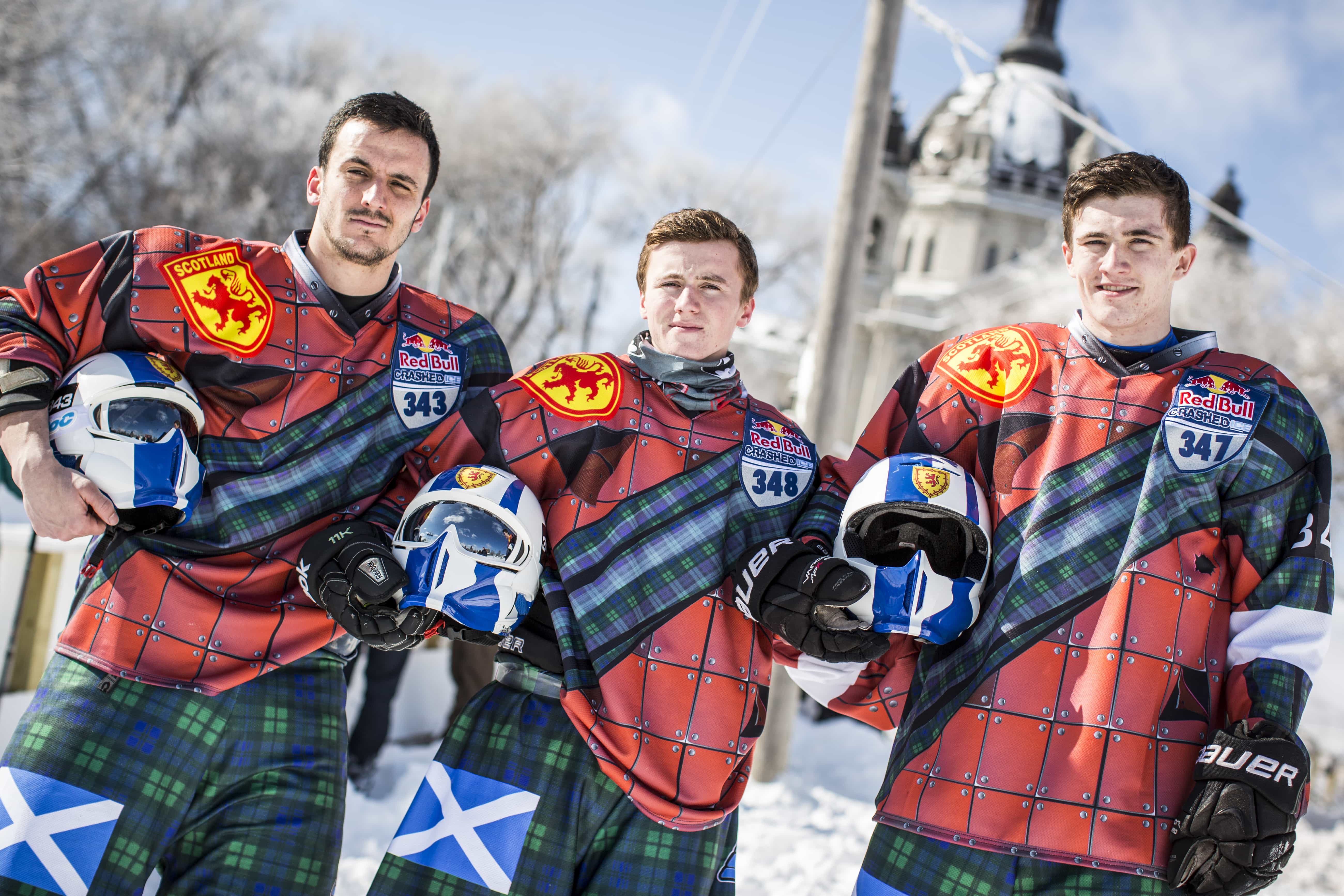 BELFAST – Callum Boyd and Haydn Bain of Scotland are hoping the first Red Bull Crashed Ice race in Northern Ireland this weekend will make the high-speed, rough and tumble sport popular throughout the UK. Northern Ireland, Scotland, England and Wales will all fall in love with Ice Cross Downhill once they see it, the two fleet-footed Bravehearts skaters in their second season in the fastest sport on skates said with their thick Scottish accents.
“Racing in Belfast is going to be great for the sport in the UK,” said Boyd, a 21-year-old refrigeration engineer from Ayr, Scotland, who got 36th at the last race in Helsinki – his best result of his six races. “So many more people are asking about it and are starting to watch it now.” Boyd, who joined the world tour after winning a Qualifier in Edinburgh in 2013, said the sport will have a special appeal for sports-loving athletes and spectators throughout the UK. “Once they see it, they’re going to love it.” Why? “Because it’s so ballsy.”

The popularity of Ice Cross Downhill took off in the United States after the first world championship race in Saint Paul in 2012. Before that action-packed race in Saint Paul, Americans knew little about the sport and did not pay much attention to it. Now there are Americans, such as Cameron Naasz and Reed Whiting, who are among the world’s best and the sport has become hugely popular in parts of the country.

Boyd and Bain also race together for Scotland in the team competition wearing their traditional Scottish colors. Boyd, who also plays hockey, said he fell in love with the sport at his first race in Helsinki last year and has since taken part in races in Moscow, Saint Paul (twice), and Quebec City as well as Helsinki (twice). “The adrenaline you get doing it is incredible. It’s just unreal going down the track so fast. Your heart is racing and you don’t think about anything else. It’s just the most fantastic thing you can imagine.”

Boyd has improved steadily in his second season in Red Bull Crashed Ice after finishing 59th overall in 2014. He was 46th in the 2015 season opener in Saint Paul in front of 140,000 spectators and was 36th in Helsinki for 36.4 world championship points. He trains with his hockey team six times a week and has another four off-ice training sessions in the gym to prepare for the races

“I’m not as nervous when I’m standing at the top of the track in the starting blocks anymore,” said Boyd, when asked to explain his steady improvement this year. “You don’t even think when you’re on the track. You’re just so excited to go down. You just want to fly down the track and get a good time. I’m a lot less nervous now. That’s really helped.”

Bain, who at 17 is among the youngest in the world championship, is 76th overall after taking 48th in Helsinki and 79th in Saint Paul for a total of 22.9 points.

“It’s just such a thrill,” said Bain, who plays hockey and is an enthusiastic snowboarder. “I’ve always liked the thrill of speed and this sport has it all. I read about it online and signed up for it. I came in second at the Qualifier in Edinburgh and that’s how I got where I am.”

Bain is studying computer aided design at Glasgow College but has scheduled his courses so that he has enough time to train and travel to the races. He also believes that once people in the Northern Ireland and Scotland get their first taste of the race they’ll only want more.

“I can’t wait to race in Belfast,” he said. “We’ve seen pictures of the track and it looks fast and really good. It’s close to home and I’m sure there’s going to be a really great crowd there.”