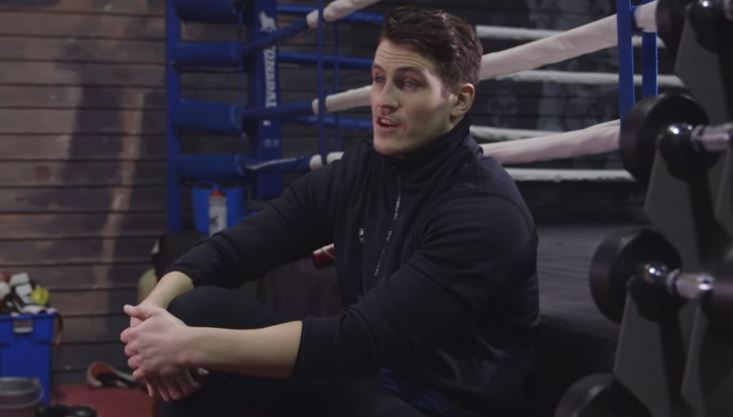 Shane McGuigan is the world’s youngest lead trainer ever to have coached someone to a significant world title, something he achieved at the tender age of 25. As the son of a sporting legend, however, his story hasn’t always been straightforward. Here’s his tale, as told by Carl Frampton, Barry McGuigan and Shane himself.

Shane McGuigan on getting started
“Dad was massively against me boxing because he’d fought his whole life – his whole career – to get me in a position where I don’t have to fight. But he took me to the club at 15, and I fell in love with it.”
“It was tough to have the pressure of my dad’s success on my shoulders. Every fight and every spar I went into, everybody tried to decapitate me! But it was character building for me, especially as a boxer because that’s ultimately what they’re going to end up doing anyway, you know?”
Barry McGuigan on his sons and his legacy
“I didn’t actively encourage my three boys to box. Apart from the fact that it’s a ridiculously tough sport, you always have an issue, you know, if you’re a great musician or a great songwriter and suddenly your son shows an inclination to play drums, the bass or lead guitar – you think, well how’s he going to be received by the general public? Normally there’s a fairly cynical attitude towards that.”
Shane on his amateur boxing career
“Dad trained me like a pro. He said, ‘If you’re going to do it, you’re going to do it all or nothing’. I boxed until I was 21, and had about 35 fights as an amateur. I only lost the two of them and won three national titles. I did well, but my heart wasn’t really in going professional. So I decided to look at aspects of personal training and go down that route.”
Shane on how he began training Carl Frampton
“One day, dad was going to do an after-dinner speech, and he said to me, ‘Can you do me a favour and hold the pads for Carl?’, and it just gelled, really. That was nearly five years ago now. I just fell in love with training, and I fell in love with training Carl, to be honest, because he’s the kind of guy who is going to give you 100%, and he’s going to respect you and listen to everything you say. It just escalated into Celtic titles, and then Commonwealth titles, and then into Intercontinental belts, and then into the world title. He’s the first fighter I’ve ever worked with, and he’s managed to become a world champion in the space of four and a half years. So it’s an incredible journey, and it’s one that I’ve massively cherished.”
Carl Frampton on working with Shane McGuigan
“I had a couple of fights where my performances weren’t great. I put them down to fitness, and didn’t think I was getting the proper training. There was one bad performance in particular, and I remember Shane sitting at the ringside … and he was the voice that I wanted to hear. I had corner men in the ring in between rounds talked to me, but his was the voice I was looking for. I realised then: I need to be here training with Shane full time, and that’s what I’ve done.”
Carl on their age difference
“It’s a very strange situation for a fighter to have a coach younger than him. You know, a lot of coaches you would see in their 60s or 70s – sometimes even 80s! In Shane, we’ve got a guy with a younger approach. He does everything for me – plans it meticulously – and it’s working a treat so far.”
Shane McGuigan on being a young coach
“It’s easy to just be negative towards youth, especially in the professional boxing industry. The stereotype is Mickey out of Rocky. Everyone wants that old trainer who has that wise head, but how can they get up on their toes and replicate a boxer? How can they mimic it and keep up with their fighter? That’s something that I can do. I get it. I understand technique; I understand strengthening and conditioning, I understand nutrition. I can put all of the pieces of the puzzle together.”
Barry McGuigan on Shane’s success at an early age
“It’s really remarkable. He’s the youngest ever trainer of a professional boxer to go and win a genuine world title. He won it when Shane was 25 years old, and I think he’s a one-off.”
Share
Tweet
WhatsApp
Share
Email
Pin
Share
Facebook
Twitter
WhatsApp
Linkedin
Previous articleLORD MAYOR GETS BEHIND SUPPORT AN ATHLETE APPEAL FOR LOCAL SPECIAL OLYMPICS ATHLETES AHEAD OF LA2015
Next articleScottish Bravehearts believe Belfast will boost Ice Cross Downhill at home

Could Michael Conlan finally receive the victory he deserves?