FOR the first time ever at a European Tour event, spectators at the Dubai Duty Free Irish Open hosted by the Rory Foundation will be allowed to take photos of the action on their mobile phones.

As part of a pilot scheme being trialled by the European Tour at the Portstewart event next week, mobile phone photography is now permitted in all areas of the course every day from Tuesday July 4 to Sunday July 9.  Video capture however will still be restricted to non-competition areas.

What’s more, to mark the this change in policy, organisers of this year’s event are actively encouraging  spectators to take out their phones at Portstewart next week and get snap happy as part of a competition to win £500 of Dubai Duty Free Irish Open and European Tour merchandise.

Whether the mobile phone photos are of players in action, the stunning scenery of the golf course, bands playing on the Showstage, or simply friends and family having fun, the European Tour is urging fans to enter the competition and help create a snapshot of what promises to be a real festival of golf, entertainment and music.

“To be honest, it’s always been extremely difficult to police so we’re delighted to be the first European Tour event to pilot this change in respect of taking photos on your mobile phone,” said Dubai Duty Free Irish Open Championship Director Simon Alliss.

“Now we really want people to take advantage of this change in policy to get their phones out and capture all of the fun and sporting action that this year’s event is set to deliver.

“We know that almost everyone now uses their mobile phone to take pictures so we’re embracing that and encouraging spectators to share their experiences on social media and show the world what a wonderful event the Dubai Duty Free Irish Open in Portstewart really is.

“And to top it all off, we’re giving £500 worth of merchandise to the best mobile phone photo taken between Tuesday and Saturday as part of our competition,” he added.

To enter the competition, fans should simply tag their mobile phone photographs with #MyDDFIrishOpen on Twitter or Instagram or add their picture as a comment in the dedicated competition thread on the Dubai Duty Free Irish Open Facebook page. The winner will receive £500 worth of Irish Open and European Tour merchandise.

There will certainly be a lot to capture at this year’s event, including:

–       International recording artists Two Door Cinema Club who will be playing at the opening ceremony on Pro Am Wednesday and Scouting For Girls who will be closing the event on Sunday evening.

–       Families having fun on ‘Family Tuesday’ (July 4) with lots of family-themed activities and entertainment in the tented village including, for the first time, a dedicated ‘Kidszone’.

–       Stunning scenery around the spectacular links of Portstewart Golf Club.

Entries will close at 1800 BST on Saturday July 8 and the winner will be announced the following day.

4)         Whilst you can now take photos on your mobile phone, recording videos is only allowed in non-competition areas

5)         At all times, please be respectful of play and considerate to other spectators

As part of the Rolex Series, with an increased prize fund of US$7 million, this year’s event which runs from Tuesday July 4 until Sunday July 9 is expected to be the biggest Dubai Duty Free Irish Open in the tournament’s 90-year history.  Anyone wanting to be part of it can still purchase tickets on www.dubaidutyfreeirishopen.com. 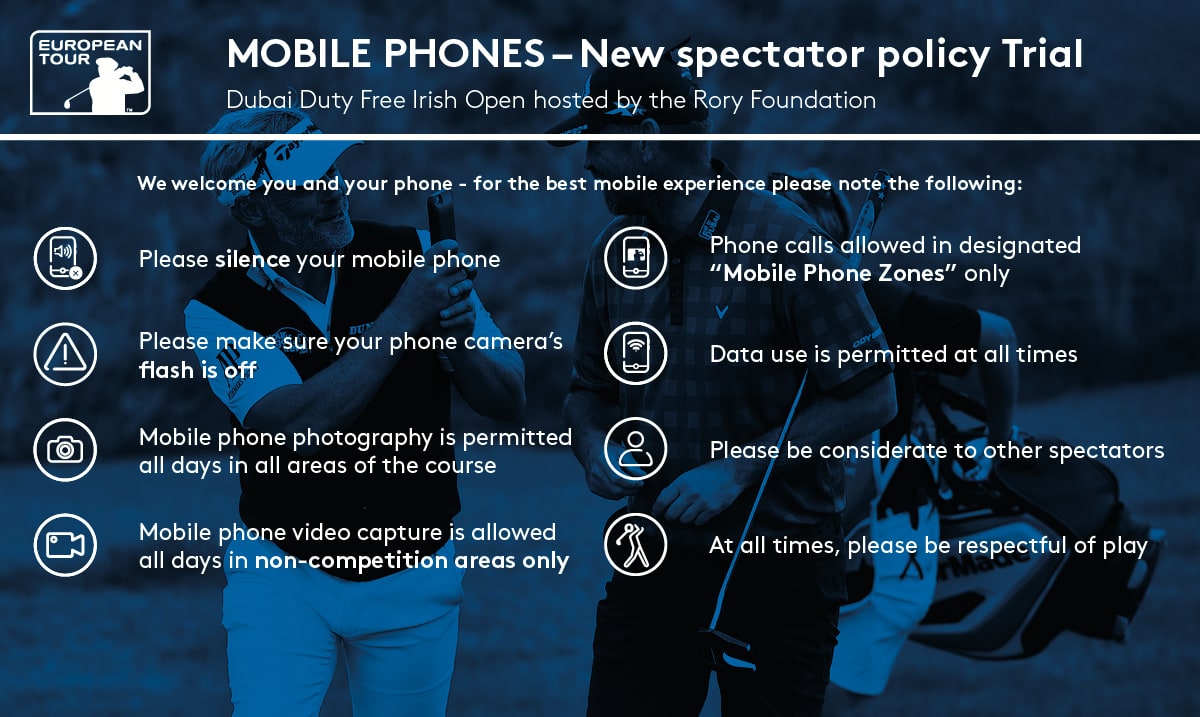 7 Essential Things Pro Golfers Have In Their Bags