We’ve done lots of things with the Titanic story over the decades in Belfast – we’ve mourned it, tried to forget it, ignored it, and then rediscovered it.  Now we’re trying to remember and re-tell it with all the respect, fascination and dignity it deserves.

So mark two big dates in your diary over the next two weeks – two very different Titanic events. 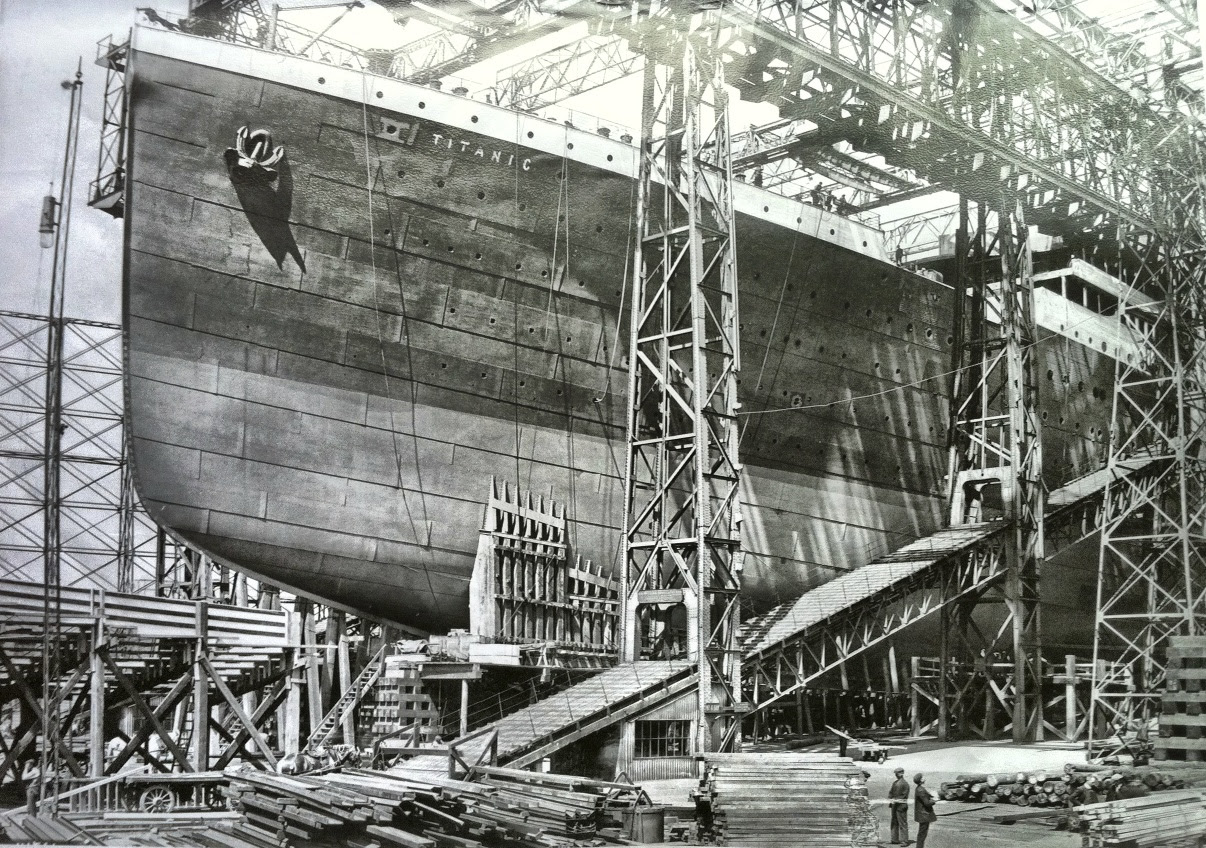 is the day that Titanic left Belfast – the day when we can temporarily suspend our knowledge of the tragic end to the story, and take time to celebrate the skill, vision and mind-boggling hard work of those who hammered together the largest man-made moving object in the world on the Belfast slipways over 100 years ago.

I think it’s really important that Belfast marks that big date, as well as the more sombre date of the anniversary of the disaster – so here in The DOCK we’ll be holding a special event on ‘She Was All Right When She Left Here Day’: 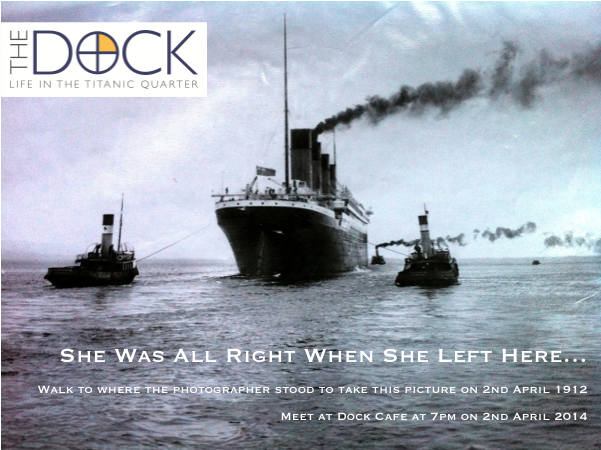 We’ll gather at DOCK Cafe at 7pm and walk together through the Titanic Quarter, past the places where Titanic was designed, built, launched and fitted-out – which will bring us to the spot where Robert Welch, the shipyard photographer, stood to take that iconic picture of Titanic sailing down Belfast Lough at 8:15pm on 2nd April 1912.

But then of course, to get the balance right, it is vitally important that we mark the end of the story. 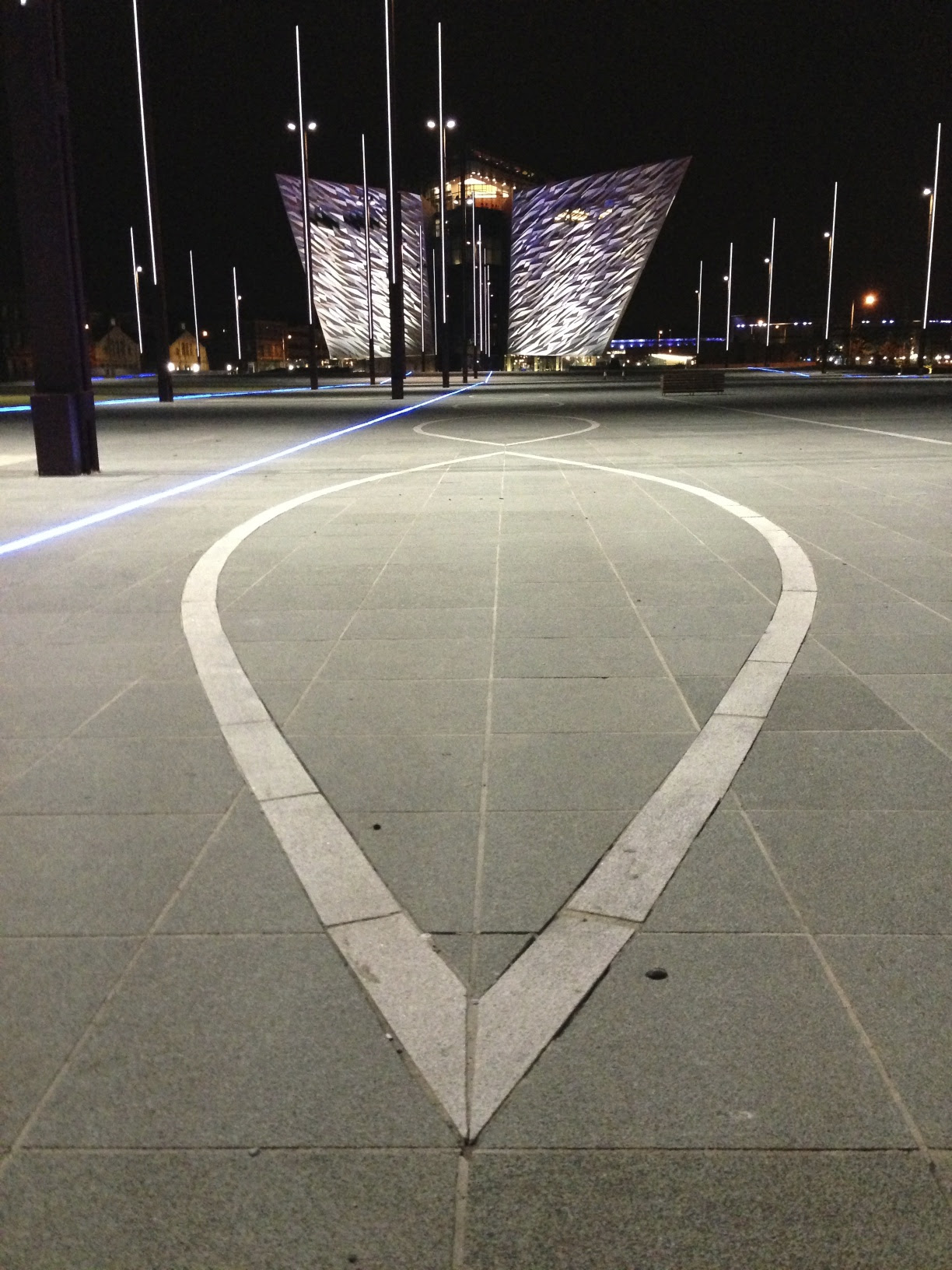 is the date on which Titanic struck a glancing blow off a stray iceberg and the world changed forever.  Over the past few years it has been an honour for some of us from Dock-world to be part of the events marking that anniversary – and so consider this your invitation to a beautiful, moving evening on 14th April which is becoming a cornerstone of the calendar at Titanic Belfast: A  Night To Remember.

You can book a place by following this link – do it now before all the slots disappear!  And then prepare for a journey through the galleries of Titanic Belfast as actors in period costume bring you through the events of 14th and 15th April 1912 using the words of those who were on board.  Then, if you want to stay until 11:40pm, we’ll gather by candlelight on the slipways, the place where Titanic began, and remember her end.

OK, marked those dates in your diary?  Good!  Then, while you’ve got the diary out, click the links to the Dock website to find out all about the opening of the Sam Thompson Bridge on 4th April, the next Sunday Night On Nomadic on Sunday 6th April, the new series of Game Of Thrones (O unbearable excitement) on 7th April, and the arrival of the Giro on 9th-11th May. 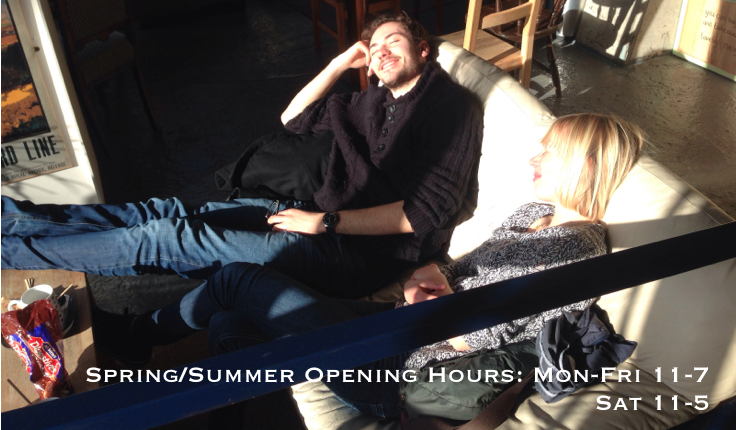 And most importantly of all, don’t forget that it is now Spring!  Yes I know you know that, but in Dock-world that means that from 7th April the cafe will stay open longer each day – so that you can now enjoy marvellous mornings, amazing afternoons and enchanting early evenings in the best pop-up-honesty-box-shabby-chic-warm-welcoming-cafe-living-room-art-gallery-market-prayer-garden-chill-out space in the world!

Love Belfast - July 7, 2020 0
Plans have been approved for the extensive Waterside development at the former Sirocco works site in Belfast, which could...

8 Types Of Friends We All Have: Which One Are You?

‘We’re Good to Go’ Rolls Out Across the Tourism Sector

Belfast City Hall to be lit in colours of French flag