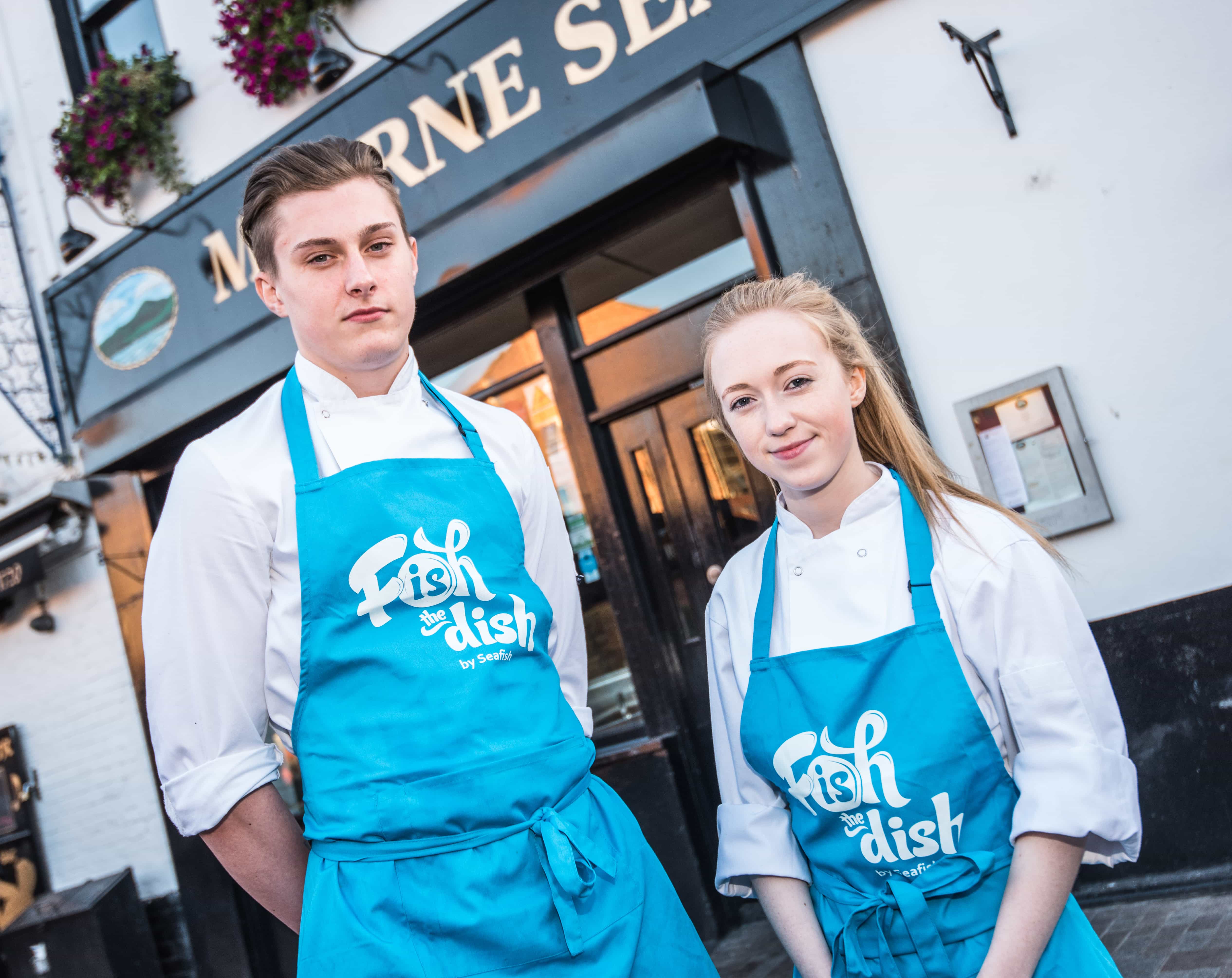 Northern Regional College in Ballymoney has landed itself a top catch after winning a celebrity backed cook-off in honour of Seafood Week, which is taking place across the country from 9th to 16th October.

The Big College Seafood Cook-Off, held at Mourne Seafood Bar and Cookery School in Belfast, was hailed as a celebration of the local seafood industry and set up to inspire future generations to cook more often using seafood.

Six catering colleges from across Northern Ireland took part in a seafood masterclass with a host of top local chefs who were then on hand to provide mentoring as the teams went head to head to produce a series of seafood dishes.

Notable culinary stars from the day included Andy Rea, Stephen Jeffers and Wayne Carville of the Mourne Seafood Bar and Cookery School, while Danny Millar of Balloo Inns, Paula McIntyre of Radio Ulster and Raymond McArdle of Maisons Restaurant were also in attendance. Each of the six chefs mentored a college to prepare a seafood dish using locally caught products.

Racheal said: “I’m so happy that we’ve won. It was a bit overwhelming at first but it was great surprise to come first. We didn’t know what chef we would be working with until we got here but it was great to work with Wayne. We had a difficult dish but we learnt loads from him.”

“The fishing industry in Northern Ireland has a very strong presence and we hope the cook-off event, and Seafood Week in general, will help to inspire people to use seafood more often.”

On the success of the event, Alison Austin O.B.E., Seafish Board Member for Northern Ireland commented: “Today is about celebrating the amazing seafood available in Northern Ireland as well as the talents of local chefs, colleges and catering students.

“As we approach 2016 and the Year of Food and Drink in Northern Ireland, we can be very proud of our local seafood and the industry that supplies it.”

The seafood banquet was served at a lunch attended by seafood industry representatives, local foodies, hoteliers and guests with a shared passion for seafood.

Dishes such as Miso Monkfish, Potted Crab and Sassafras cured mackerel whetted the appetite of guests. Colleges competed to win a series of coveted awards as part of the cook-off including Best College, Best Individual College Chef and The Seafish Seafood Award for Most Knowledgeable Student.

The aim of Seafood Week is to get more people, to eat more seafood, more often promoted by Fish is the Dish, the consumer face of Seafish, the industry authority on seafood.

Visit www.seafoodweek.co.uk for a heap of information on buying, preparing and cooking with seafood as well as plenty of supermarket and restaurants offers going on throughout the week.

6 Kitchen Gadgets to Complete Your Kitchen

Dished up Deli brings homemade cooking to your doorsteps