The limelight comedy club continues with another stellar  line up this Thursday!

Phil Nichol is a truly unique performer.  An acclaimed actor, award winning comedian, producer, presenter, writer and musician, there is no end to his talent!

Phil is an energetic and exciting performer with an unquenchable thirst to break boundaries and innovate with his work.  His skill as an improviser whether it be musical, comedy or straight is unparalleled. With a surreal edge to his mischievous rantings, Nichol always brings something new to the stage. His keen sense of fun and eye for the shocking and absurd has cemented his position as one of the best comedians on the circuit today – shown clearly by his record-setting six nominations for the Chortle Awards’ ‘Best Headliner/Club Comic’.  Phil’s assured and award winning performances in his theatrical work have attracted critical accolades and see him in great demand as an actor. 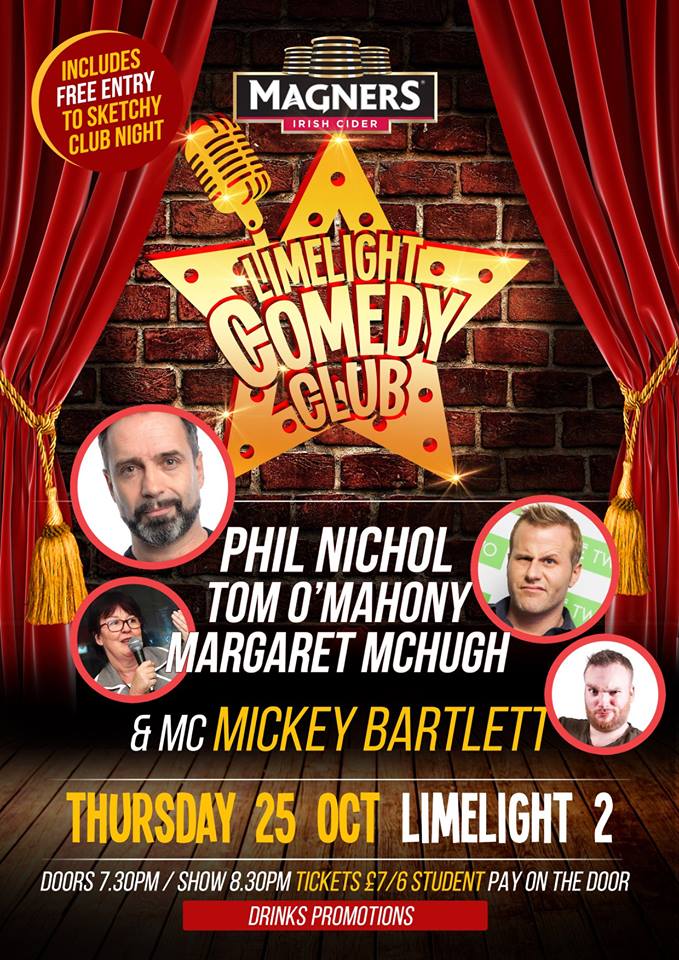 Tom O’Mahony is an Irish professional stand-up comedian and actor. He’s one of the busiest Irish acts on the circuit playing every major festival and club here and abroad and is fresh off tours with MTV star Tom Green and Mock The Week regular Tom Stade. With his own sell out shows in Edinburgh, Cork, Leicester, Dublin and Barcelona Comedy festivals, Tom has gone on to support the likes of Nina Conti (Cork Opera House), Michael Winslow (of Police Academy fame) Abandoman, Neil Delamare and Tommy Tiernan as part of their nationwide tours.
Margaret McHugh is a stalwart of the Irish comedy scene who has graced stages the length and breadth of Ireland and beyond, as well as our telly screens.

Northern Ireland’s own Micky Bartlett is gathering both momentum and acclaim as one of the fastest rising stars on the live stand-up circuit as well as for his hilarious TV appearances including 2 series of BBC NI’s Monumental.

Micky has supported Patrick Kielty in the star’s warm-up shows for his Home tour. Following this show, Micky was invited to support the rest of the tour, performing to sell-out crowds all over the country and finishing up in the 4,500 seat Odyssey arena.

2017 has seen Micky make his solo debut in London’s West End with a run at the prestigious Soho Theatre, be featured on the Irish episode of BBC Radio 4’s State of the Nations, create more online content for the BBC plus make a welcome return to Glastonbury. He has premiered his latest show, Typical! at the Edinburgh Fringe and performs a tour across the east coast of Australia as well as throughout Ireland and Europe in the autumn.