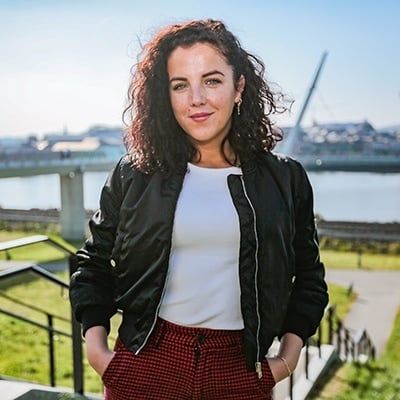 Fifty years on from Bloody Sunday this timely documentary follows Jamie-Lee O’Donnell, one of the stars of Channel 4’s award-winning comedy series Derry Girls, as she explores how things have changed since she – and her character Michelle – grew up in Derry. Produced by Tyrone Productions with support from Northern Ireland Screen, The Real Derry: Jamie Lee O’Donnell airs on Thursday 16th June at 10pm on Channel 4.

With her trademark wit and warmth, Jamie-Lee documents the city’s complex past and offers her own personal insight into her upbringing in a Catholic community.

On a visit to her old school St Cecilia’s College, Jamie-Lee finds out what life is like for young people today and how many of the younger generation feel the impact of the Troubles despite being born after the Good Friday Agreement.

As they enjoy a night out in Derry, Jamie-Lee and her Derry Girls co-star Saoirse Monica Jackson talk about makes their home city so special, and she meets TikTok star Mammy Banter aka Serena Terry to learn how she’s helping local people with their mental health.

She also meets the Churchill Flute Band to learn more about Protestant culture, including one of its members Julie Porter who explains why identity is so important to her community.

Jamie-Lee said: “This documentary is something I’ve always wanted to do. To give the world a current look at the city I’m so proud of and the people who make it. Tyrone Productions and Channel 4 were the perfect fit to tell this story and I’m so excited for everyone to see it!”

Daniel Fromm, Commissioning Editor, Popular Factual, Channel 4, said: “I’m hugely excited to be working with Tyrone Productions on their first commission for Channel 4 – and with Jamie-Lee in a brand new role for her. Derry Girls has brought the city to national prominence, now this film gives a voice to a new generation of its young people, so they can tell us what it’s like to grow up there in 2022.”

Producer Patricia Moore said: “This is a very timely and personal documentary told from Jamie-Lee’s unique perspective. We’re delighted that a Northern Ireland production company can shine a light on a place we all know and love – and that Jamie-Lee will help the Channel 4 audience gain a new insight into her home city.”

Northern Ireland Screen Chief Executive Richard Williams said: “We congratulate Tyrone Productions on its first commission from Channel 4 and we are very much looking forward to seeing the documentary. It is great to have Jamie-Lee back on screen giving audiences a look at the issues facing Derry today, 24 years on from where Derry Girls left off.”

Festival of music and light comes to the Walled City

WIN A WINTER WARMER STAYCATION IN THE WALLED CITY