Giants Start In Scotland As 2015/16 Schedule Is Announced

The Stena Line Belfast Giants will get their 2015/16 Elite League season underway in Scotland on Friday 4th & Saturday 5th September with Challenge Cup road trips to Dundee and Edinburgh respectively.
The Giants home opener will take place the following Saturday, 12th September against the Manchester Storm, face-off 7pm at the newly refurbished SSE Arena Belfast.
The famous ‘Christmas double header’ in Edinburgh returns to the schedule and, in turn, the SSE Arena Belfast will host eight weekends with back-to-back home games, including against Edinburgh, Cardiff, Sheffield (x2), Nottingham, Coventry and Fife.

Giants games at Christmas are, once again, the place to be – with four home clashes over the festive period.
The 2015/16 season sees a higher number of home games from previous seasons with the Giants playing all individual Challenge Cup group games. The Challenge Cup group stages are followed by two-legged quarter-finals and semi-finals – and a stand-alone final at the Sheffield Arena on Sunday 6th March 2016.
The final weekend of the regular season will be the 19th and 20th March 2016 with the Playoffs getting under way the following week with the top eight seeded clubs qualifying for the two-legged quarter-finals.
The winners from the quarter-finals will reach playoff finals weekend at the National Ice Centre in Nottingham on Saturday 2nd and Sunday 3rd April 2016.
Tickets for all Stena Line Belfast Giants home games will go on sale soon at all the usual outlets: Ticketmaster Online, all Ticketmaster Outlets and from the Arena Box Office either in person or by phoning (028) 9073 9074.
Go to www.BelfastGiants.com for the full 2015/16 Stena Line Belfast Giants schedule.
Enter our competition below to win a VIP suite for upto 12 people. 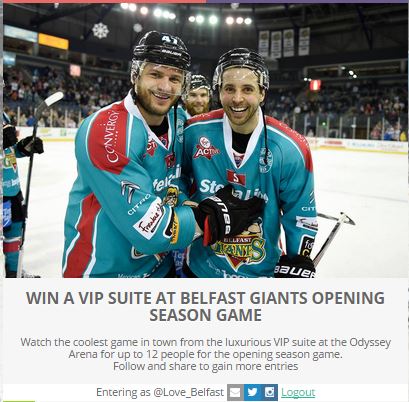 JULIAN IS SANTA (AND WE’RE NOT CODDING YOU)!