For a 40 second #FREEZEHOF challenge to promote mental health awareness

Wim Hof and Kim Constable (AKA The Sculpted Vegan) want to join forces with the people of Northern Ireland to promote mental health awareness.

On Sunday morning, Wim Hof will be live via the internet at Helen’s Bay on The Sculpted Vegan instagram account, cheering on the people of Northern Ireland as they take to the freezing coastal waters in a bid to promote mental health awareness. 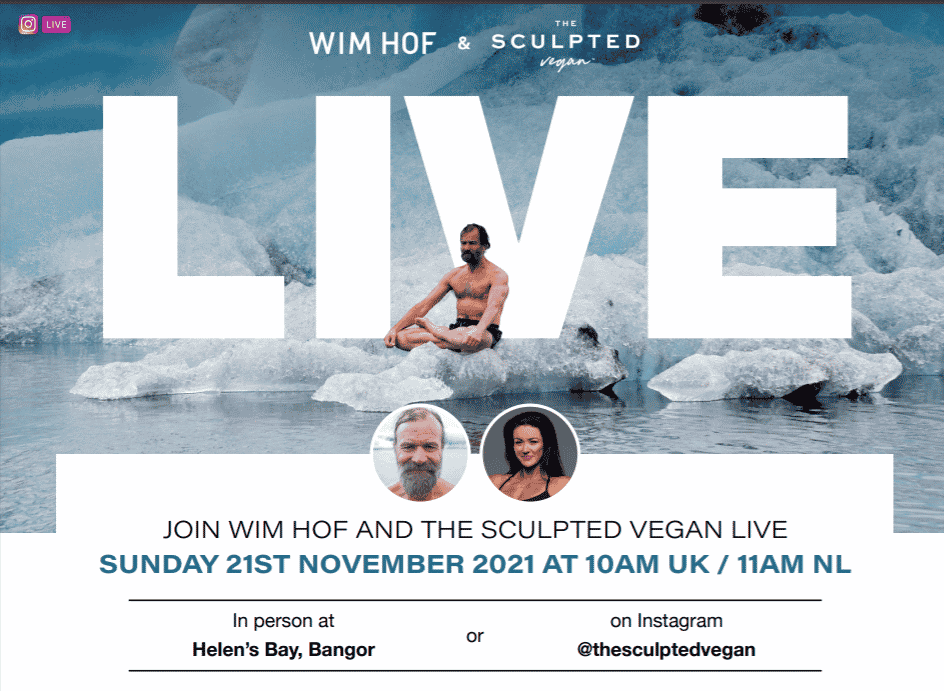 This is a once in a lifetime opportunity to connect with Wim Hof LIVE!

To participate all you have to do is show up and immerse yourself in the water for 40 seconds.

To promote the challenge simply share your video on Instagram with the hashtag #FREEZEHOF You can also nominate 5 people to participate in the challenge.

The people of Northern Ireland have an incredible way of rolling up their sleeves and getting it done. Start your Sunday right with #FREEZEHOF

Who is Wim Hof?
Wim Hof (born 20 April 1959), also known as The Iceman, is a Dutch motivational speaker and extreme athlete noted for his ability to withstand freezing temperatures. Wim has set Guinness World Records for swimming under ice and prolonged full-body contact with ice,
and previously held the record for a barefoot half marathon on ice and snow.

Wim says:
21 years ago.. my wife took her life when she jumped from the 8th floor down. I was left alone with four kids to bring up. I had lost the love of my life. This beautiful soul who I was with for 15 years. I was not only heartbroken but deeply deeply depressed. Powerless, numb and in great despair. My kids made me survive but the cold healed me..

We do not need to be powerless in the face of depression, fear, anxiety, trauma, PTSD, Bipolar, or schizophrenia.

#FREEZEHOF is an opportunity for us all to come together.