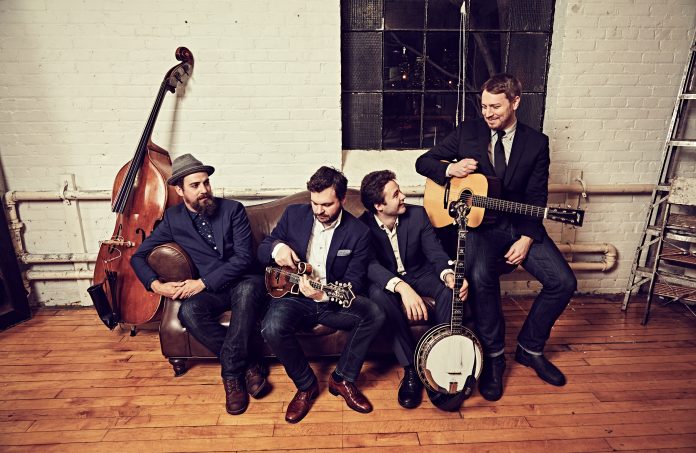 – World class line-up of performers will play across three stages –

Ulster American Folk Park has announced the return of the Bluegrass Omagh music festival after a two year break due to the pandemic. Now in its 30th year, big crowds are expected to attend across the two-day event on 28th and 29th May to mark this significant milestone.

Multi-award winning acts from both sides of the Atlantic will take to three stages. From international acts including The Slocan Ramblers, Seth Mulder & Midnight Run, Vivian Leva & Riley Calcagno and Aaron Jonah Lewis, to our finest local artists such as No Oil Paintings, Joshua Burnside and Cup O’Joe.

Set against the vibrant and imaginative backdrop of the Ulster American Folk Park, visitors will be transported to Appalachian America – the root of bluegrass music – to enjoy strumming on the porches, dancing on the cobbled streets, and jamming outside the General Store as the sounds of banjos, guitars and fiddles fill the air.

John-Paul Coyle, Visitor Services Manager at the Ulster American Folk Park, said: “We are delighted to welcome people back to Bluegrass Omagh to help us celebrate its 30th anniversary. This year, we decided to host the festival in May to allow for brighter evenings, and hopefully warmer weather.

“This event is one of the best and most authentic bluegrass experiences on offer, not only in Northern Ireland, but across the world with both home-grown talent and performers from across the Atlantic coming together to share their music.

“The museum setting adds to the experience as it helps bring to life what is widely considered the beginning of the bluegrass genre, when the people who emigrated to the heartland of Appalachian America, brought their music styles to the Blue Ridge Mountains of Virginia and the Great Smoky Mountains of North Carolina. Bluegrass is in the depths of our DNA at the Folk Park and the distinctive style of a lot of modern-day American country, bluegrass and folk music can be traced directly back to emigrants from Ulster. It is wonderful to keep this heritage alive and continue to share the rich cultural expressions of song and dance.”

To mark the 30th anniversary, local musicians and songwriters Rachel McCarthy, Katie Richardson and Jackie Rainey have collaborated to perform songs from the bluegrass, folk and Americana artists who have inspired them over the years. This performance will include three part harmonies and covers from a range of artists from the bluegrass and folk music genres.

Speaking about this one-off collaboration, Carolyn Mathers, Director at Snow Water, the company behind the programming of the festival, added: “It has been an immense pleasure to programme the 30th Anniversary of Bluegrass Omagh, given the incredible reputation it has established over the years. We curated a line-up that will appeal both to bluegrass purists and to those new to this rich, vibrant and colourful scene. The special collaboration between Rachel McCarthy, Katie Richardson and Jackie Rainey will bring their incredible collective musical backgrounds together to express their love of bluegrass and country music, and will add to the spirit of the occasion.”

Bluegrass Omagh has previously been nominated for ‘Bluegrass Event of the Year’ by the International Bluegrass Music Association and over its 30-year legacy has become part of the fabric of Omagh that delivers for the local economy with international visitors enjoying the town’s hospitality offerings and other tourism hotspots in the region.

The two-day festival is sponsored by Fermanagh and Omagh District Council. Chair of Fermanagh and Omagh District Council, Councillor Errol Thompson, said: “As an Omagh Town Councillor I am delighted that Bluegrass Omagh at the Ulster American Folk Park, is returning this year.  The Council is pleased to be able to provide sponsorship towards the Festival which is celebrating its 30th anniversary this year.

“The Bluegrass Festival is a significant event for the District providing a much welcome boost to the local economy and in particular the tourism and hospitality sector.  The Council is committed to ensuring that the District is an attractive place to live, work, visit and invest in, and events such as this contribute to the achievement of this.”

Festival-goers can pay homage to the heritage and legacy of the Appalachian settlers through music, but they will also have the opportunity to enjoy wholesome food, musical workshops and artisan craftwork across the weekend.

Kathryn Thomson, Chief Executive of National Museums NI, said: “It’s wonderful to reflect and see just how significant an event Bluegrass Omagh has come to be and how it has enabled us to show that museums are more than buildings and collections, but an integral part of society and our wellbeing. We’re proud of the contribution that the festival makes to the local economy and community each year with visitors coming from across Northern Ireland, Great Britain and even further afield to enjoy the experience year on year.”

The festival will take place at the Ulster American Folk Park in Omagh on Saturday 28th and Sunday 29th May, 2022, with performances starting each day at 1pm and running to late evening. For more information and for tickets, please visit https://www.bluegrassomagh.com/.

AUTUMN ADVENTURES AWAIT IN OMAGH AND THE SPERRINS REGION