Ulster showed tremendous spirit to snatch a late draw (23-23), maintaining their unbeaten home record in the competition this season. 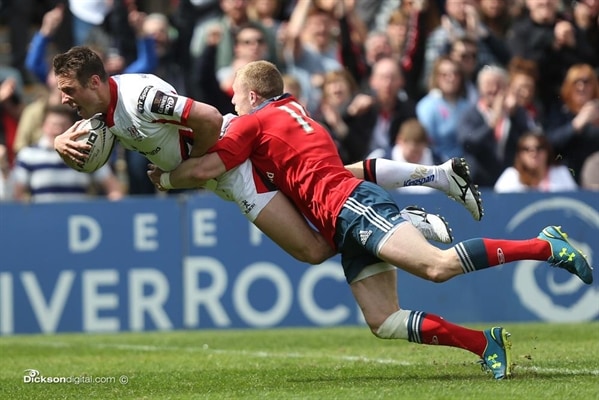 A 14-man Ulster team saw out the regular Guinness PRO12 season unbeaten at home with a 23-23 draw against Munster at a sold-out Kingspan Stadium, keeping alive their hopes of hosting a play-off in two weeks.

Neil Doak’s men displayed tremendous fighting spirit to stay in the hunt, with substitute Paul Marshall crossing for a try in the dying seconds, after Iain Henderson had been sent off with six minutes to go. Paddy Jackson held his nerve to level the scores from the tee in what was a fine afternoon for the young flyhalf.

Munster played their part in an enthralling inter-provincial clash, with Ian Keatley knocking over six penalties in an assured display.

The hyped-up home support at Kingspan Stadium had to watch on as the visitors dominated proceedings early on. But despite edging close to the whitewash on a couple of occasions, Munster had to settle for a fifth minute penalty from outhalf Ian Keatley.

It was then Ulster’s turn to display their attacking credentials, with Jared Payne and Roger Wilson looking particularly dangerous with ball in hand as the hosts started to find their rhythm. Magical link up play from Paddy Jackson and Darren Cave sent Louis Ludik free down the right touchline, but Tommy Bowe over-ran the fullback and was unable to collect the pass with the line at his mercy, much to the disappointment of the Kingspan faithful.

The drama continued as Keith Earls then pounced on a loose pass to kick through and chase, but despite his good footwork en route to the try line, a combination of Rory Best and Henderson covered superbly to thwart the scoring opportunity.

Keatley kicked two penalties in quick succession to push his side nine points clear, as Ulster struggled to make any impact on the scoreboard. The first came as Callum Black was penalised at scrum time, before Henderson’s side entry at a midfield breakdown gave Keatley another chance in the 36th minute.

Ulster responded brilliantly with a four minute spell just before the break that yielded 10 points, the first of which came from Jackson’s unerring boot following a powerful home scrum. The flyhalf then added the extras to a sensational try from Bowe on the stroke of half time.

Henderson was the catalyst with a sublime offload and the Ireland winger showed his class with a fine finish, swerving round fullback Felix Jones and evading the covering defence to dot down.

Ulster started the second half as they finished the first, with Cave bursting through the opposition midfield inside 60 seconds. That pressure led to a kickable penalty for Jackson and he made no mistake to extend his team’s lead to four points.

Munster’s pack took control of the third quarter, with powerful set piece work laying on a further two penalty opportunities for Keatley, which he duly accepted to regain the lead, 13-15.

Quick lineout ball on the half way line enabled Pienaar to feed Bowe, who sliced through with ease but was unable to find the supporting Chris Henry with a reverse pass.

Keatley and Jackson swapped penalties to bring the scoreboard to 16-18 with only ten minutes left on the clock, but Ulster’s hopes of a win were dealt a severe blow when Henderson was shown red for dangerous clearing of a ruck. Munster capitalised immediately as the ball was shipped wide to Earls inside the 22 and he was able to manoeuvre his way past Ludik. Keatley missed his first kick of the match but the game looked safe at 16-23.

But back came Ulster. Payne did the initial damage with an incisive break and lovely passing by Pienaar and Jackson gave Paul Marshall – a second half replacement for Peter Nelson on the wing, an easy run in. Jackson stepped up to add the extras to the sheer delight of the home support. 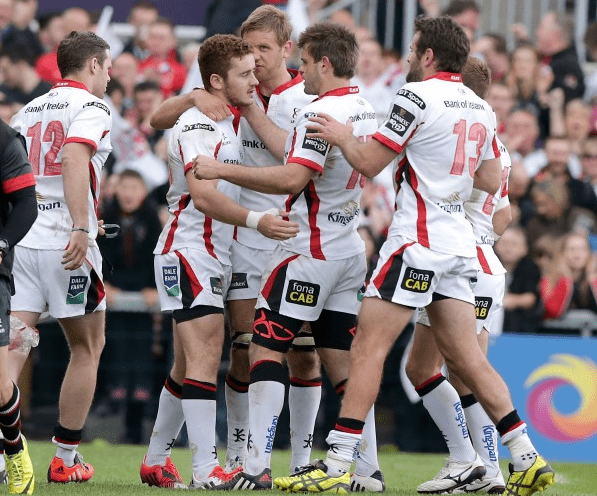 How to listen to talkSPORT’s Lions coverage