It was a tough night at the office for the Stena Line Belfast Giants in Altrincham on Saturday night, dropping 2 Premier Sports Elite League points in a 3-0 defeat at the hands of Manchester Storm.

Goalie Matt Ginn was Storm’s Man of the Match with the shutout; however, Belfast will rue their lack of viable scoring chances after being held to the perimeter for most of the game.

For a sizeable portion of the Belfast Giants roster, it was their first experience of the Altrincham Ice Dome and its claustrophobic ice pad, and it showed in the early minutes as the visitors worked to adjust to the extremely tight neutral zone and imposing offensive blue line.

Manchester, much more used to their surroundings, had a slight edge in the first ten minutes. But despite former Giant Liam Morgan coming close on an opening Storm power play (Murphy, Interference, 8:11), the visitors held on.

Kevin Raine was sent to the box at 14:36 for interference, following a stiff hit on Wade MacLeod against the neutral zone boards. Manchester built upon their offensive zone time back at even strength, and finally broke the deadlock at 17:53 when Adam Brady pounced on a loose puck in front of Tyler Beskorowany’s crease. (Assist: Linden Springer, 1-0) 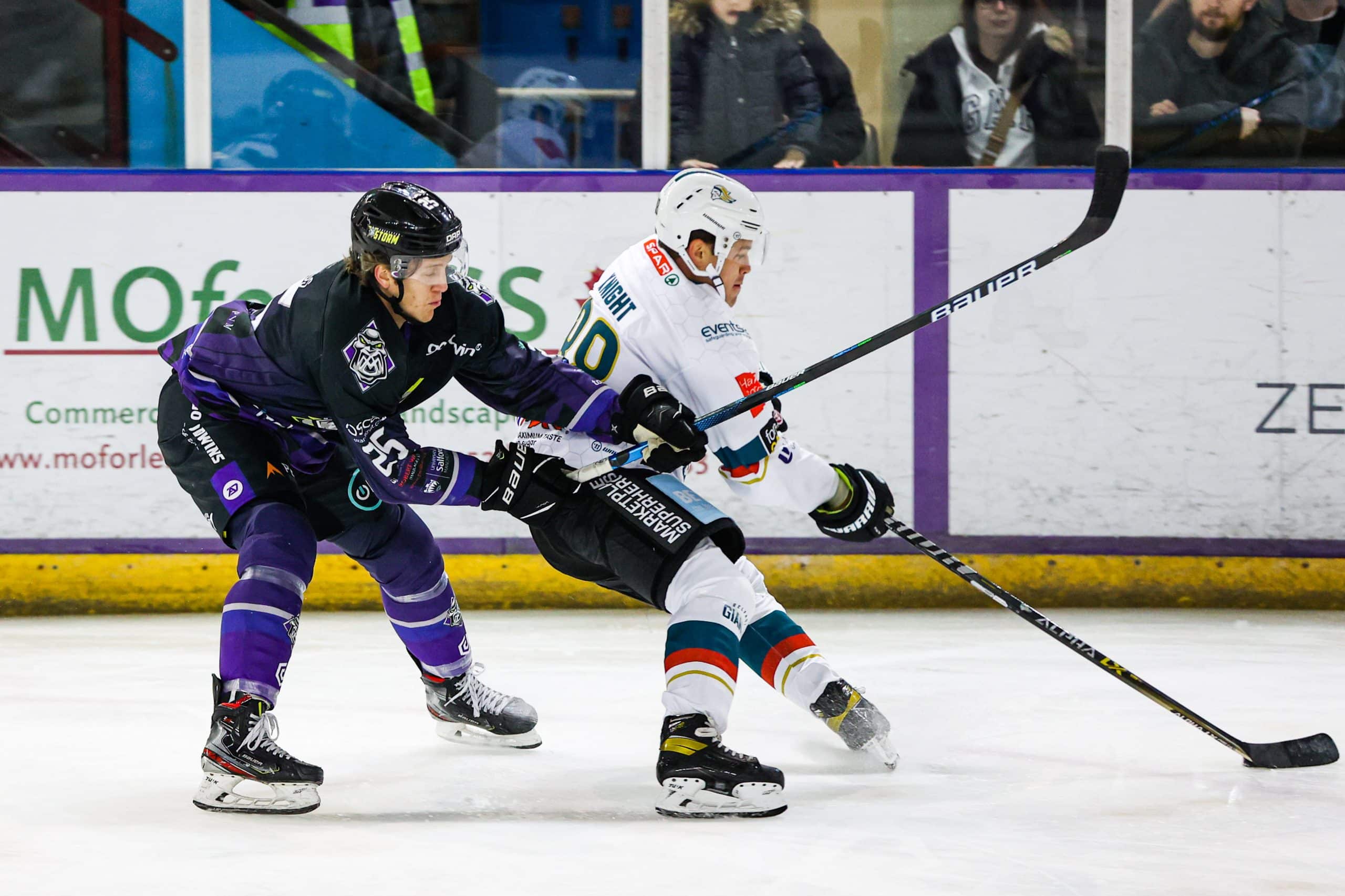 Belfast had a slightly better start to the middle period, throwing pucks towards Matt Ginn in the Storm goal in the opening minutes, however the visitors struggled to work their way in close.

It was 25:21 before the Giants power play unit had their first outing of the night, albeit an unsuccessful one, courtesy of a Wade MacLeod slashing call.

A tight JJ Piccinich wraparound attempt sparked a melee with around 6 minutes left in the period, with Ben Wilson offering to drop the gloves with the Giants forward. Whilst Piccinich thought better of it; the tempo noticeably increased in the final five minutes as the visitors surged forward in search of an equaliser.

There was just enough time left for a Belfast power play as Cam Critchlow took a cross-checking call at 37:57, but the visitors continued to struggle for consistent zone time.

The physicality of the game was noticeably higher as the final 20 minutes got underway.

An odd man rush with 14:17 left was perhaps the best chance of the game for Belfast, but Matt Ginn stood tall in the face of Ciaran Long’s attempt on goal.

The Giants’ chances of a comeback were then dealt a hammer blow, with two Storm goals inside a minute. First, Cam Critchlow netted from the slot after taking a Scott Simmonds pass from the left circle at 48:29 (2-0).

Belfast’s blushes were somewhat spared with 6:27 left, as a 4th goal for Manchester was waved off following an inconclusive video replay.

Adam Keefe pulled Beskorowany with 2:37 left, but the visitors’ efforts were in vain as the Storm chipped away in their zone, sealing a 3-0 win.

How to Get a Loan When You Have No Guarantor