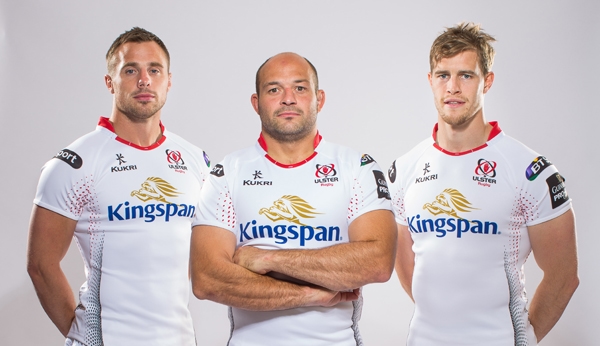 The new Kukri Ulster Rugby kit for 2015-17 has been unveiled at a spectacular launch event at Kingspan Stadium.
Almost 1,500 supporters turned out as a giant image of Ulster captain Rory Best and fellow internationals Andrew Trimble and Tommy Bowe wearing the new home shirt was revealed on the back of the Memorial End Stand.
Ten internationals in total were present at the launch, which was hosted by Stephen Clements from Citybeat, Ulster Rugby’s new radio partner.
Ulster’s new home and away kits feature Kingspan across the chest as the province’s new main sponsor and combines the latest kit technologies to create bold new designs.
The Bank of Ireland logo remains on the jersey, with BT Sport on the sleeves and new sponsor, Go Power, featured for the first time on the back.

Friday Ulster Rugby Season
Created by Kukri’s team in Lisburn, County Antrim, the home shirt incorporates Ulster’s traditional colours of white, red and black and is made from 4D technical fabric with a ‘bridge’ collar. It has a four-way stretch, making it a much tighter, neater fitting jersey.
The shirts are also sublimated to keep them lightweight and feature special panels designed to minimise abrasions.
The new cyan away jersey also incorporates the latest kit technology and with a distinctive green trim on both the shirt and the shorts it is sure to stand out both on and off the pitch.
Ulster will wear the new away jersey against Leinster on 21st August in a pre-season game at Kingspan Stadium and in the pre-season match versus Edinburgh on 28th August at Goldenacre.
Terry Jackson, Director and General Manager, Kukri Ireland said: “We’re really pleased with how the new kits look and we hope the Ulster Rugby supporters will love them too. Our design team has maintained the traditional Ulster colours but has added modern elements to the design.
“To launch the new kits in front of so many supporters at Kingspan Stadium is fantastic and it demonstrates the popularity of Ulster Rugby and interest levels in our merchandise.”
The new elite home and away Ulster Rugby jerseys start at £50 for children and for £65 for adults and are on sale in the Ulster Rugby shop at Kingspan Stadium, in retailers and online at www.ulsterrugbyshop.com.

A loose fit, supporters’ jersey costs £45 for children and £55 for adults and is available to pre-order online at http://www.ulsterrugbyshop.com/collections/replica-kit, in the Kukri shop or over the phone and will be in stores at the end of August.