Foo Fighters have announced Frank Carter & The Rattlesnakes and Hot Milk as special guests for their Belfast and Dublin dates at Boucher Road on 19st August and RDS Arena on 21st August.

These will be Foo Fighters’ first Irish shows since they headlined Slane Castle in 2015. 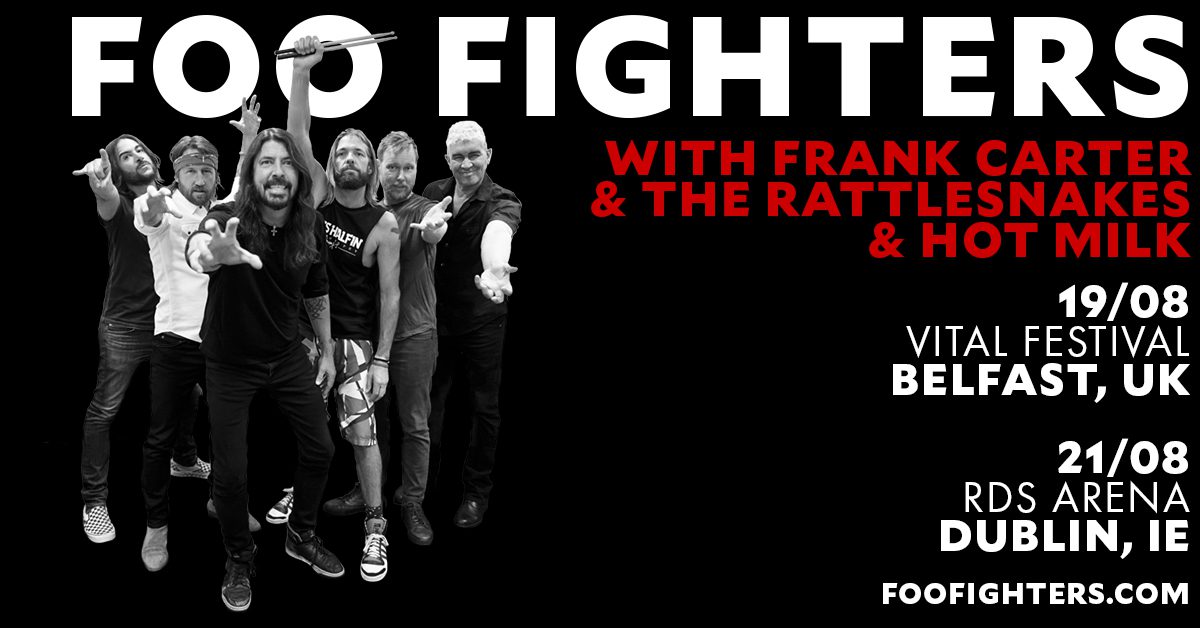 Dave Grohl, Taylor Hawkins, Nate Mendel, Chris Shiflett, Pat Smear and Rami Jaffee continue to sell out stadiums and arenas the world over. The band’s current live show, described by Rolling Stone as “explosive and euphoric… wild and combustible at the place where Grohl’s love for punk and classic rock coalesce into something raging and tuneful… a show of enthusiasm that has grown over decades,” will be visiting the following cities and venues:

Having covered ground from Reykjavik to Las Vegas in 2017, the tireless Foo Fighters began 2018 with an Australia / New Zealand stadium tour, and proceeded to play three-hour-plus rock marathons for capacity crowds over multiple nights at some of the world’s most prestigious venues: Madison Square Garden, Fenway Park in Boston, Wrigley Field in Chicago, London Stadium—plus a return to Ullevi Stadium in Gothenburg— the site of the accident that led to the 2015 Broken Leg Tour. 2018 also marked the sophomore year of Foo Fighters’ own CalJam festival. CalJam ’18 outdid its classic debut year with an all-hits Foo Fighters headline set, a rare Iggy Pop reunion with the Joshua Homme-helmed Post Pop Depression band, and an encore celebration of Nirvana–featuring an onstage reunion of Krist Novoselic, Dave Grohl and Pat Smear, with appearances from Joan Jett, Brody Dalle of the Distillers and John McCauley of Deer Tick.

How To Combat Zoom Fatigue

Love Belfast - December 1, 2021 0
It is possible to fight fatigue from video calls. The first step is to turn off your computer camera. During a video call, the...

Ironing revealed as the most avoided chore by Brits

Love Belfast - November 30, 2021 0
A 9-year-old schoolgirl has had a taste of political life in Belfast after becoming the city’s Lord Mayor for one day only.

Social intelligence is the key to unlocking value on TikTok, Facebook...