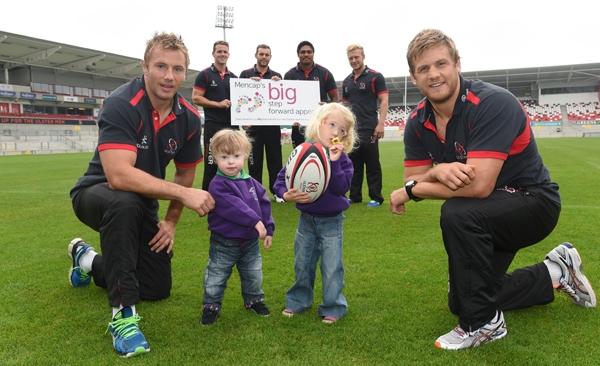 Ulster Rugby and its supporters have helped raise a staggering £29,877 in aid of its official charity partner for 2014/15, Mencap in Northern Ireland, smashing its target of £25k.

Over the past 12 months, Ulster Rugby has hosted several fundraising initiatives and special events to raise vital funds for Mencap’s Big Step Forward Appeal, aimed at creating a new centre for children and young people with learning disabilities and their families in Northern Ireland.

Thanks to the results of the partnership, as well as the ongoing generosity of the Northern Ireland public and other organisations, Mencap is now well on its way to reaching its £1.7m target to build, equip and run the new centre.

Mencap’s new Children and Families’ centre is set to open in January 2016 in Newtownbreda, Belfast. At the heart of the centre will be the relocated Segal House, Mencap’s nursery for 2-4 year old children with a learning disability, autism and global developmental delay.

Fiona Hampton, Head of Sales & Marketing with Ulster Rugby said:   “We are exceptionally proud that Ulster Rugby and our supporters have raised this impressive sum for our chosen charity partner Mencap this year. It is a pivotal time for Mencap, as the charity builds towards the opening of its new centre in Northern Ireland and we are delighted to have helped play a part in that journey.  “On behalf of all the players and everyone involved at Ulster Rugby, we would like to thank our supporters for getting behind this important cause and making such a difference for Mencap.”

Vanessa Elder, Regional Fundraising Manager for Mencap in Northern Ireland added:   “Having a partner like Ulster Rugby has been of huge value to Mencap over these important 12 months. Every penny of the funds raised will go towards our new centre, which will bring the therapeutic care, information and support young people with a learning disability and their families need, under one roof.   “We extend a heartfelt thank you to Ulster Rugby and the supporters who gave so generously at matches and events – the impact of this contribution will be felt by many for years to come.”

How to listen to talkSPORT’s Lions coverage