Stones In His Pockets – The Barn Theatre’s 25th Anniversary Production 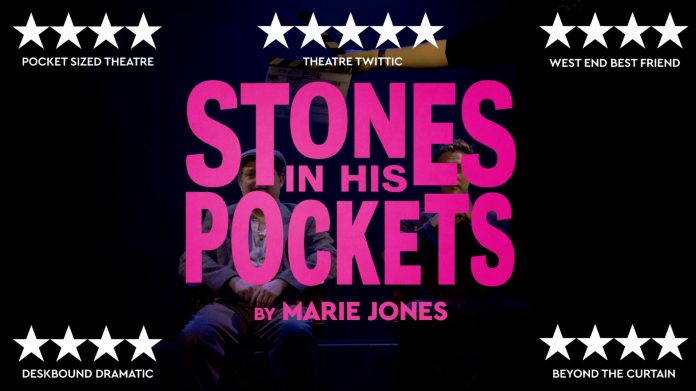 Lights! Camera! Action!! HOLLYWOOD is coming to the Lyric Theatre Belfast… but what happens when two Irish extras become the stars?!

Set in rural Ireland, a small village is turned upside down by the arrival of a Hollywood studio to film the latest historical blockbuster. Told through the eyes of local lads Charlie Conlon and Jake Quinn, who are employed as extras, it soon becomes clear that Tinseltown’s romanticised dream of Ireland is a long way from reality…

Directed by Matthew McElhinney, son of the play’s writer and original director, this new 25thanniversary production of Marie Jones’ tragic comedy,Stones in His Pockets, brings an authentic rediscovery of the worldwide phenomenon, which has won numerous awards including both the Olivier and Evening Standard Awards for Best New Comedy, as well as three Tony nominations on Broadway.

Shaun is an actor and screenwriter from Downpatrick, Northern Ireland. He made his professional stage debut in 2009 with Tinderbox Theatre company’s Sleep/Eat/Party, written by Damian Gorman and directed by Michael Duke. Since then he has created work for theatre and screen, including Farr for RTE Ireland which won five international awards including best drama series and best actor for Shaun’s performance in the leading role. Last year Shaun andGreenshoots returned to the Lyric with one-man showIn the Name of the Son, charting the life of Guildford four inmate Gerry Conlon, for which he was nominated for Best Actor at the Irish Times Theatre Awards.

Gerard has numerous panto and small screen credits and he is the founder of Pintsized Productions and Artistic Producer at Sodabread Theatre.

Marie’s plays have toured extensively throughout the world, including the former Soviet Union, Germany, coast to coast America, Canada, Britain and Ireland. Her plays include an adaptation of Gogol’s The Government Inspector, which toured in Britain and Ireland and A Night in November(London, Glasgow, New York and three tours of Ireland). Marie also starred in and wroteWomen on the Verge of HRT(Belfast, Dublin, Glasgow and London’s West End Vaudeville Theatre).

Dancing Shoes, the story of George Best, co-written with Martin Lynch and the Miami Show Band Story also co-written with Martin Lynch both premiered at the Grand Opera House and went on to tour the UK and Ireland.Stones in His Pockets, which toured Ireland prior to the Dublin Theatre Festival culminating in a four-year run-in London’s West End, gaining many wards including the Lawrence Oliver Award for Best New Comedy and the Evening Standard award for best new Play. Her Broadway debut of Stones in His Pockets gained 3 Tony nominations and won the American Drama Critics award. Marie’s plays have been translated into 38 languages. Night in November, Fly Me to The Moon andStones in His Pockets are currently playing in most countries in Scandinavia, also in Poland, Hungary and Croatia. Stones in his Pockets has just had its Indian Premier. Night in November will have its 25th Anniversary production in April/May at the Irish Arts Centre in New York.Dear Arabella, her latest play, was directed by Lindsay Posner the Oliver Award Director and premiered at the Lyric Theatre.

She has been awarded two honary doctorates of literature from Queens University and the University of Ulster. She has also been awarded an OBE (Order of the British Empire).

Matthew McElhinney is an actor and director from Northern Ireland. His directorial career began when he assisted on the award-winningCrimea Square which picked up the Audience Choice Award at the Belfast Festival. From there he has gone from strength to strength securing a top five spot in 2017 Edinburgh Fringe and a five-star review in The British Theatre Guide with his work onFrank Carson; Rebel without a Pause. He has directed large scale outdoor family events, Footsteps in the Forest, andWaking the Giantfor Newry, Mourne and Down District Council. And the commemorative events of Observe the Sons of Ulster Marching towards the Somme for Orangefest andLetters from the front, for Remembrance Day. All met with much acclaim. He took the helm as community director on We’ll Walk Hand in Hand, a large community outreach project and stage play exploring Civil Rights in Northern Ireland. His recent production ofBetrothed, appeared at Belfast’s Grand Opera House to a completely sold-out run. He is also working on bringing to stage the story of the world-famous Dead Rabbit bar in New York. Matthew recently directed the 25thanniversary production of A Night in November, before the pandemic, where it was received glowingly from audiences and critics alike before setting out on an Irish tour. It was set to transfer to New York. Unfortunately, Covid 19 struck and so he put together a digital online performance for the IAC in New York pioneering the new medium of immersive live performance in a digital post Covid world. It is due to return for an English tour this year to the Chiswick Theatre, London and the MINACK, Cornwall. Matthew is excited by the prospect of reclaiming and reimagining this production of his mother’s play,Stones in His Pockets, with the exciting and dynamic creative team at The Barn Theatre

Since launching in 2018, the Barn Theatre has gained national recognition having produced over 20 Built by Barn shows and being awarded The Stage Awards’ Best Fringe Theatre of the Year Award 2019.

STONES IN HIS POCKETS

Esteemed writers host fundraising event at the Lyric for Ukraine

Roll up! Roll up and check out our brand new artwork for Pinocchio: The Greatest Wonder of the Age!

ROLL UP! ROLL UP! AS CHRISTMAS RETURNS TO LYRIC THEATRE

Top Fun Outdoor Activities To Enjoy With Your Friends

Top Ways to Keep Your Home Warm; Here’s What You Need to Know