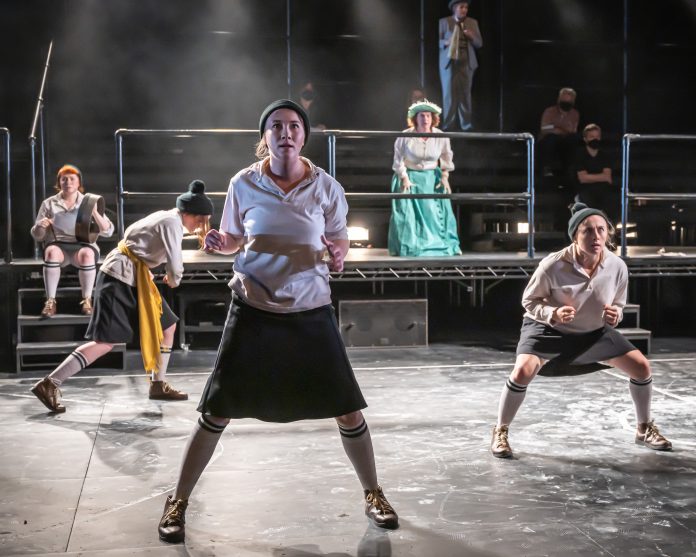 Now showing at the Lyric Theatre, the unique 11-strong all-female cast take to the stage as factory workers turned footballers. Our Rough Girls, in secondhand male-worn mottled jerseys, awkward shorts and burglar-style bobble hats compete to win for charity – with all their winnings (or shillings) going to wounded men coming back from war. Their endearing lack of ‘ladylike’ demeanors sets the tone for the two-hour set, as we learn having so much as a hobby as a woman in Belfast between 1917 – 1921 was frowned upon.

The backlash and struggle of our on-stage suffragettes is hardly surprising as they try to find their way in the male-dominated world of football. What is surprising however, is that this is the first time their story has been brought to our attention.

The true events that inspired the production breathe life into an already relatable and believable performance. The team’s captain, Molly, played by Eloise Stevenson gets her namesake from a real female footballer.  Mary-Ann Seaton or ‘Big Mary’ who hailed from the Shore Road was considered as one of the Ireland’s greatest female footballers. The dramatic ban on women’s football, that you may have considered was added in for our entertainment – was very much the reality 100 years ago. In fact, 2021 marks the centenary of the Football Association’s (FA) banning of women’s matches on FA-affiliated pitches.

It is these ‘must-Google-when-I-get-home’ moments that suggest the story of Rough Girls will far out last its last performance on the 25th of September. Mark our words.

Although the play reflects attitudes towards women from 100 years ago, any self-identifying female will quickly realise its themes are not so far away from experiences shared today. The life purpose of the woman and what she can and can’t do in a man’s world will resonate with audiences – football-related or not. But in a year where the Northern Ireland women’s football team qualified for the Euros, the audience can find comfort in knowing that some things have changed since.

Aside from its clever writing and much appreciated frequent injection of local humour, the music production (Katie Richardson, Emma King) and dance choreography (Dylan Quinn) make for a thoroughly enjoyable and unforgettable performance.

There was no heckling here for our Rough Girls, and whilst we had to cheer them on from the sidelines in a socially distanced standing ovation – it is moreover a sign of the times that great theatre is back.

Rough Girls is now showing at the Lyric Theatre until the 25th of September 2021. 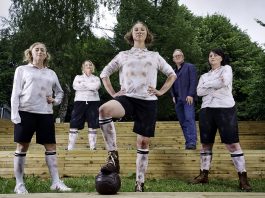 ‘BACK OF THE NET’ AS ALL FEMALE CAST GET READY FOR... 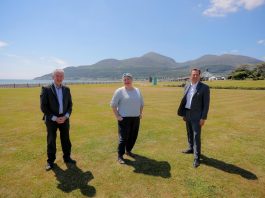 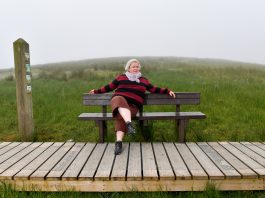