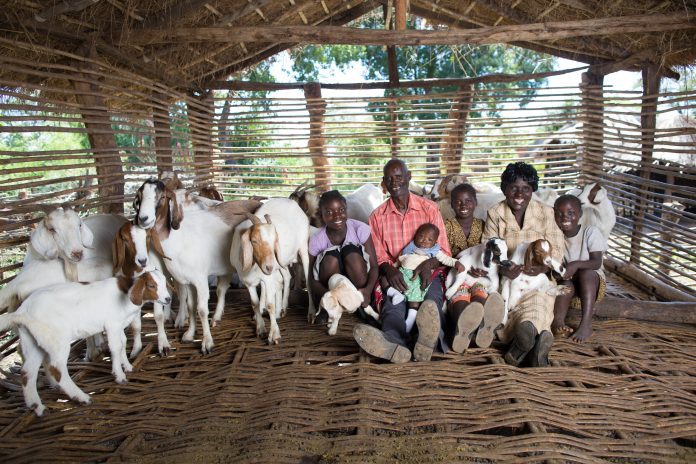 Queen’s University Belfast (QUB) is supporting a Northern Ireland charity with its efforts to combat the increasing resistance of livestock in the Developing World to medical treatments.

The initiative between QUB and Self Help Africa NI is designed to provide a low-cost response to the heightened resistance of goats in Malawi to de-worming anti-microbial treatments.

The wprk by Professor Eric Morgan and his research team at QUB, in collaboration with Lilongwe University of Agriculture and Natural Resources in Malawi has developed a five-point test that Community Animal Health workers can use to estimate the level of worm infestation in goats.

Regular deworming of animals in Malawi has led to a resistance in herds to the treatments. However, rural poor farmers often cannot access or afford the testing that is recommended to determine levels of resistance.

The team at QUB is testing for signs of scouring, nasal discharge, bottle jaw, body condition and anaemia, with their results determining whether it is cost effective to treat the animal with de-wormer, or with plants that are known to possess anthelmintic properties.

The project is cataloguing and testing plants that farmers already use as natural de-wormers and testing other plants that may be de-wormers. As well as reducing the risks of resistance to de-wormers and costs, if successful the research will help build natural immunity to worms within flocks. A related project is using remote sensing and rainfall data to determine when the risks of goats picking up worms from pastures is at its highest.

Denny Elliott, Head of Northern Ireland Self Help Africa, said: “This collaboration for Self Help Africa NI with Queen’s University Belfast is helping the poorest of farmers to protect their livestock and secure their livelihoods for the short term by providing them with this test that they would otherwise not be able to afford.

“We are also working with Queen’s and a number of other institutions in the UK and Africa to field test an app with our farmers which is being created to analyse rainfall and determine high risk periods of worm infestation so farmers will therefore only need to treat their animals during this time.

“Although we have been faced with an unimaginable challenge during the pandemic, collaborations are invaluable as we look beyond 2020 and Self Help Africa NI is also facilitating a Phd project blending traditional and new animal health solutions funded by the Northern Ireland Department for the Economy which supports agro-pastoral livelihoods under climate change.”

Eric Morgan, Professor in Veterinary Parasitology at QUB, said: “Smallholder farmers in Africa face high losses from worm infections in goats, which impact productivity and animal welfare. Chemical treatments are often unaffordable, and are not needed by all animals, while plants available locally can also support animal health and nutrition for free. By working with Self-Help Africa NI and farmers in Malawi, we can identify problems in individual animals and focus limited resources on those, to support health, production and livelihoods. Healthy livestock have never been more important for people to fall back on in these uncertain times.”

While this is part of an international strategy to discourage routine livestock deworming and persuade farmers to adopt Test and Selective Treatment (TST), the work of Self Help Africa NI also includes developing community empowerment projects funded by Northern Ireland Department for the Economy in Teso and post COVID-19 the charity will continue its commitment to reduce the gender gap and continue to build and develop Ugandan farmers agro-economic visibility and nutrition security.

If you would like to make a donation or find out more about Self Help Africa and how you can help, visit www.selfhelpafrica.org

Reasons Why Belfast is a Good Place to Study

EXPERIENCE THE CAMINO WITH SELF HELP AFRICA NORTHERN IRELAND

GIFTS FOR A LIFETIME THIS CHRISTMAS

Castello Italia Brings a Taste of Italy To Carrickfergus