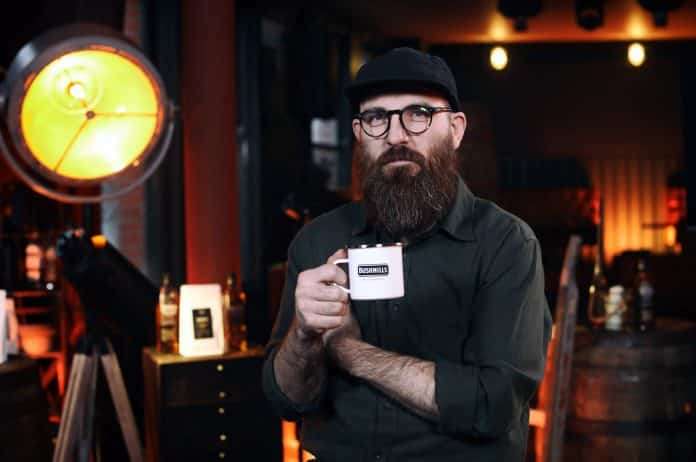 Northern Ireland based coffee vanguards, Established Coffee, and iconic distillers Bushmills® Irish Whiskey have launched an exciting collaboration and product offering for coffee and whiskey enthusiasts around the globe.

Both pioneers of their respective industries, planning for the collaboration began in mid-2021, founded through a mutual respect for craft and innovation. Having identified kindred spirts in each other, Bushmillls and Established Coffee were inspired to work together to develop an exclusive Bushmills Black Bush Irish Whiskey barrel aged coffee blend. Responding to recent trends and the rise in coffee-based cocktails and pairings, both brands wanted to bring something new and exciting their customers and to a wider global audience. 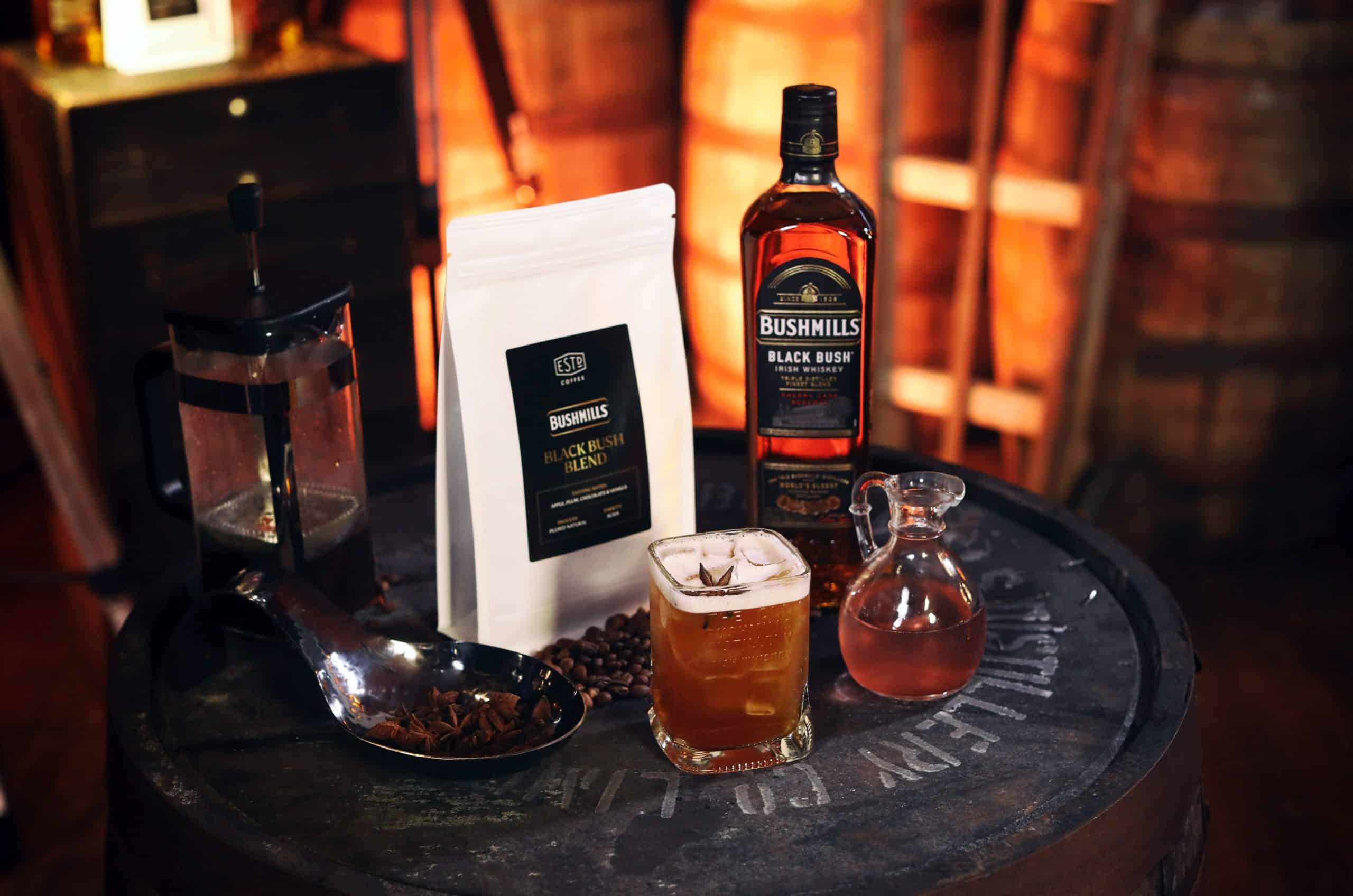 ‘Black Bush Blend’ is the result of months of work, research, testing, tasting and many sleepless nights. The limited-edition coffee was officially launched on Thursday the 3rd of March – International Irish Whiskey Day – to 550 guests at an immersive virtual experience called Black Bush Stories.

Within 15 minutes of sampling, the first batch of coffee had sold out on Established’s website prompting a restock of product which is now available on https://established.coffee. Retailing at £11, Black Bush Blend is roasted to order in small batches and available in both ground and wholebean options, shipping across the island of Ireland, the UK and worldwide.

The coffee is a single origin coffee from a farm in Brazil called Daterra. It is a Peaberry lot called Pearl. The green coffee has been aged in Black Bush Olorosso Sherry Cask and Bourbon Barrels provided by The Old Bushmills Distillery – the world’s oldest licenced whiskey distillery – which is then roasted and blended together.

As in the ageing of Black Bush, the barrels add soft fruit notes of apple and plum, with an aromatic vanilla note too. The coffee has also taken on a slight fermented aromatic note whilst maintaining a rich, syrupy body with notes of chocolate that comes from the green coffee itself. 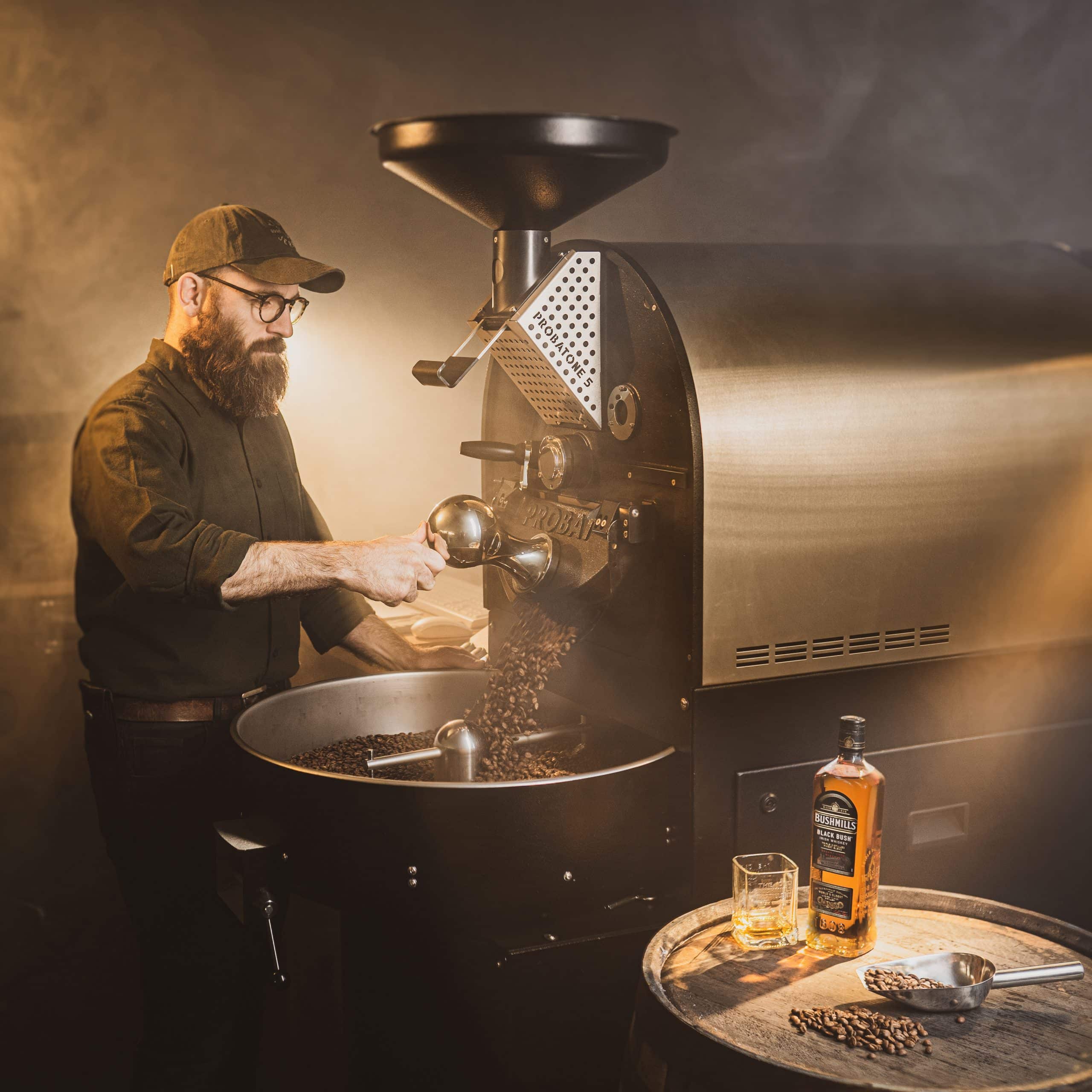 Launched at the exclusive Black Bush Stories event, Bushmills Black Bush x Established Coffee was an immersive 90-minute masterclass celebrating the passion, art and craft behind creating both Black Bush and artisan coffee. Anyone who missed out on the live event can watch it back at their leisure on Bushmills’ YouTube channel

Speaking about the collaboration Mark Ashbridge, Founder of Established Coffee said: “We were really excited to work with Bushmills on this project as there are so many synergies of craft between Bushmills and what we do here every day. At Established we strive to innovate, learn and evolve, and so we welcomed this opportunity to push ourselves and create a blend that can be enjoyed as a morning brew or as part of a delicious Black Bush cocktail.

“The resulting Black Bush Blend coffee is so interesting on the palette, and we couldn’t believe it sold out in 15 minutes. Feedback has been extremely positive so we’re working around the clock to roast more batches and restock.

“I am extremely proud of the collaboration with Bushmills and our Established journey so far, from opening the café in 2013 to opening our own roastery during the pandemic. We have an incredible team of people around us and I am excited to see where this journey takes us.”

Inspired by the craftsmanship, passion and care that goes into every bottle of Bushmills Black Bush, Black Bush Stories celebrates the stories and talents of extraordinary Irish individuals who have challenged traditional thinking in their respective fields. Bushmills Black Bush x Established Coffee is the first in a series of immersive collaborations planned for 2022. Stay tuned for more exciting announcements in the coming months.

Keep up to date with #BlackBushStories and join in the conversation, follow @BushmillsIRL.

WHISKEY AND TEA BLENDING MASTERCLASS TAKES PLACE AT THE MENAGERIE