This weekend the Stena Line Belfast Giants return to Elite League action for back-to-back home games against the Sheffield Steelers! The NCAA also arrives back in Belfast as Clarkson University & Northeastern University take to the ice for the first ever global womens’ games!

The Steelers are in 6th spot, 15 points behind the Giants, and boast familiar faces in Rob Dowd and Davey Phillips as well as Jackson Whistle and Ryan Martinelli – who make their first return to Belfast after winning the Challenge Cup with the Giants last season.

Face-Offs this weekend are 7pm Saturday, 4pm Sunday and tickets are on sale NOW from the SSE Arena Box Office, in person or by calling 028 9073 9074, or via the Ticketmaster website.

With an important battles in the Elite League, NCAA hockey, cash prizes to be won, Fanzone and more – here is your Essential Guide to a GIANT Weekend at The SSE Arena…

These top female athletes will be playing regular season games with both games completely free of charge! Simply arrive at the Arena and you can pick up your free tickets on your way in. Then, the Arena will clear ahead of the Giants vs Steelers games that follow. 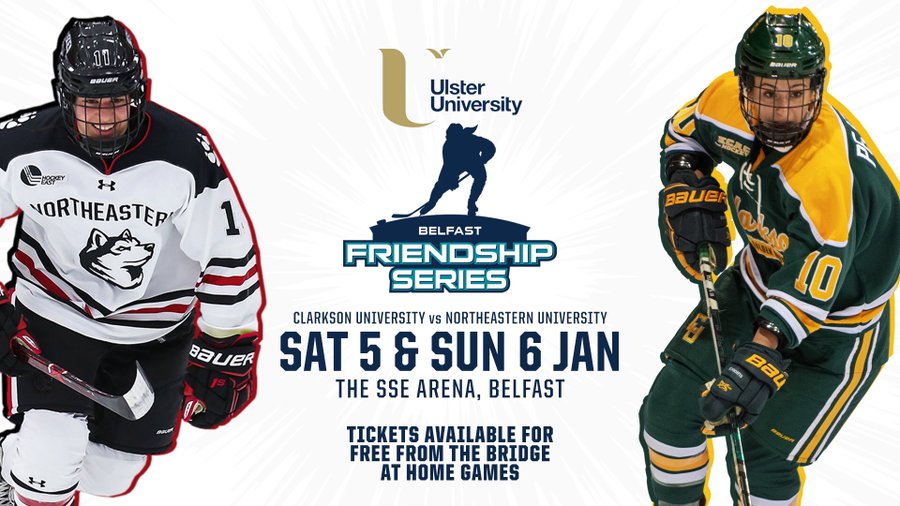 After Sunday’s game – the full Giants team will be in McCools where you can enjoy a drink with the players, Giants fans as well as some Clarkson & Northeastern fans too. There is a designated family area in the lounge connected to McCools – so even if you have kids with you, you can still be part of the post game fun. All drinks will be 25% off post-game in McCools!

McCools will be open on Saturday and Sunday post-game – so stick around. There will be no autograph session this Saturday with the full team in McCools after Sunday’s game.

You could win some GIANT prizes at this weekends games with our Chuck-A-Puck, 50/50 AND Shirt Off The Back competitions!

Chuck-A-Puck: Chuck your (foam!) pucks onto the ice during the intermission right after the 2nd period and the closest THREE pucks to centre-ice will win, with a 1st prize of a trip for 2 to Scotland thanks to Stena Line, 2nd prize of a signed jersey and a 3rd prize of a family pass to the Giants game of your choice! Chuck-A-Pucks will be on sale all night for £1 each.

Make sure to check out the Fanzone, located on ‘The Bridge’ at the east end of the Arena. Chocallure will be there with their warm belgian chocolate chocolate cups and you can also take advantage of special Fanzone offers from the Food & Beverage Cart.

The Official Supporters Club will also be in the Fanzone along with Stephen Murphy’s Testimonial Desk and of course you can test your hockey skills at our Virtual Hockey Simulator!

Dale Farm’s famous (& tasty!) milkshakes, only £3 each, are back for the weekends game – available at selected stands around the Arena.

The ‘2nd Period Blitz’ is back this weekend! Stay tuned during the game to find out which selected food & bev product will be reduced to only £2 during the intermission following the 2nd period.

Download The SSE Arena app and you will be able to enter competitions, use exclusive selfie frames and take advantage of special offers on food and drinks!

Keep an eye out for the Sub Cannon launching Footlong Subway Sandwiches during the second intermission at both games this weekend! We will also be giving away Dale Farm Ice-Cream, Subway Cookies, W5 Family Passes, Odyssey Cinema vouchers and much more throughout the games.

Remember to make some noise and you just might win the Pizza Hut Fan of the Match and win a delicious Pizza Hut pizza. You can call in for your very own Pizza Hut meal after the games – they are located in the Odyssey Pavilion next to the Arena.

Love Belfast - August 15, 2022 0
Cryptocurrency assets are extremely volatile, and can be stolen or lost through scams or theft. This is one of the main risks associated with...

Love Belfast - August 16, 2022 0
Musgrave NI is returning to Down Royal as it takes on title sponsorship of the racecourse’s August Bank Holiday fixture. The partnership will give the...