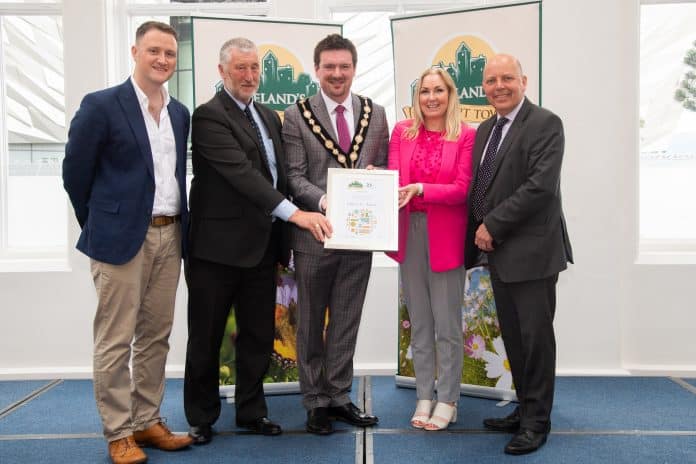 Enniskillen volunteers and community organisations involved in improving their local area are celebrating winning Ireland’s Best Kept Large Town and the Best Overall, all-Ireland titles. It is the only town in the island of Ireland to lift the title twice, having won the Best Overall accolade in 2014 and the Large Town category three times before in 2013, 2014 and 2017.

The results of this year’s annual competition were announced today at an awards ceremony held in the Drawing Office of the Titanic Hotel Belfast.

The judges’ citation documented the strong presence of civic pride apparent across the town of Enniskillen and specifically mentioned “The ‘Wide Awake Way’ and the area around Racecourse Lough locations, “where much thought and effort has gone into supporting biodiversity with wildflower meadows also helping to promote insect life such as bees, butterflies and others.”

They noted that, “Enniskillen is a most attractive town and has managed to combine its location on the river Erne with an ability to maintain and enhance its many historical features”.

Congratulating Enniskillen on their awards, Doreen Muskett President of the Northern Ireland Amenity Council said: “We are thrilled to see Enniskillen win the prestigious Ireland’s Best Kept Overall award for the second time in the competition’s history, and the Best Kept Town award, both so well deserved.

“Throughout the pandemic thousands of volunteers and gardening enthusiasts kept our, towns, villages and the country looking its best. The awards illustrate and emphasise how much voluntary work is undertaken to keep Enniskillen beautiful and how the community works together to make where they live desirable.

“We are also delighted to see Lisburn beating off strong competition to take the Best Kept Large Urban Centre category, especially since it is the first time the city has qualified for the competition.

“These awards create links between community involvement, our natural environment and our wellbeing, helping us to recognise the value of our biodiversity and coming together to play our part in making our own parts of the country places we are proud to call home.”